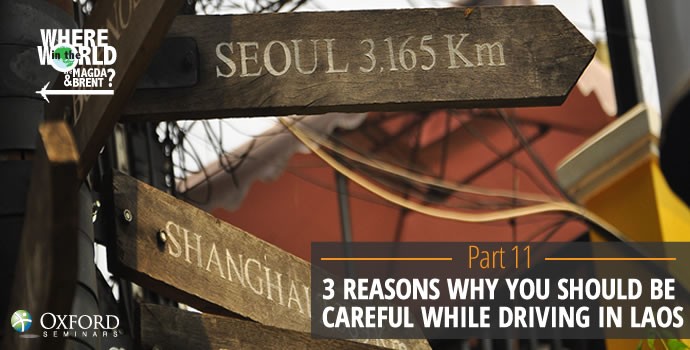 3 Reasons Why You Should Be Careful While Driving in Laos

Where in the World are Magda and Brent? Learning Why it’s good to be cautious when driving in Laos

While the bus ride to Savannakhet was smooth and restful, the overnight bus to Vientiane was anything but. I am surprised our brakes stood up to the relentless screeching as we wound down steep mountain passes and around tight hairpin corners. Twice I was nearly flung from my seat as we twisted and rolled down the road. Although overnight buses offer some efficiency and save you paying for a night in a hotel, they aren’t always the “sleeper” experience the name promises. At one point after finally being able to fall asleep, the bus promptly stopped and all the lights came on. The driver announced with perfect irony: “Everybody wake up, it’s time to take a rest!” This about summed up the ride to Vientiane. This guy had a full battery powered, mobile photo print shop…one of the many strange vehicles we saw in Laos

Tired, weary, battered, and bruised, we arrived in Vientiane at about 4:30am and ignored all the calls for taxis and tuk tuks in our bedraggled state as we trudged the two kilometers (1.25 miles) to our guest house. They didn’t have any rooms free at this ungodly hour, so early check-in was not an option, but they did allow us to curl up with our bags on the benches around the breakfast table to catch a few broken hours of sleep. Maybe we could find it in our budget to hire a private plane for the rest of the trip? Any benevolent benefactors out there?

After taking a much needed rest, we rented a bike from the guest house and set out to see Pha That Luang, the enormous golden stupa at the heart of Vientiane. Driving in Laos is different than Vietnam. At first glance, it all seems more logical and orderly, but while Vietnam roads are chaos on a strip, there is a strange logic to the flow. Everyone must watch out for everyone else, and somehow this herd mentality keeps everyone alive and mostly in one piece. Laos does not share this observe thy neighbor outlook. The roads may seem more sane on the surface, but underlying the veneer of orderly conduct lies a stern every-vehicle-for-itself motif that makes driving a particularly tense experience (especially on a small motorcycle since, again unlike Vietnam, Laotian roads are inhabited primarily by cars).

We followed the signs to Pha That Luang, and as we passed with the tall spire to our left, we saw a handy arrow directing us to turn on to a side street. As we turned, a helpful policeman guided us to a shaded parking spot. Or so we thought… It turns out this road allowed no left turns (why was the arrow there?), so we were actually being pulled over. He asked for my license since I was driving, but since I didn’t have mine on me, I gave him Magda’s. This discrepancy didn’t seem to faze him. Through gestures and a smattering of English words, he communicated our infraction and demanded 300,000 kip as punishment.

Many travel guides and blogs mention corruption in Southeast Asia, but I must say in the few trips I’ve made to the area, it’s not something I’ve ever encountered or at least noticed. Now my Spidey Sense was beginning to tingle. Since 300,000 kip represented fully half of what I’d taken out for our entire time in Vientiane, I decided to try a little of the negotiating skills I’ve honed in the various markets and shops we’ve been to along the way. And again, something seemed odd since there was clearly an arrow telling us to turn down this road. I figured what harm would there be in offering a little less? If it was a legit set fine, he’d stick to the amount and that would be that. If not, well, maybe we could save ourselves a little money while keeping him happy. I decided 200,000 was a fair compromise. He looked around and quickly said, “OK”. He then took 100,000 of the money I gave him, slipped it into his pocket, and put the rest into a large bag of cash he’d collected on the day. Welcome to Southeast Asian law enforcement!

After that unpleasant yet also somewhat humorous experience, we decided that we needed a break from the heat, so we scouted out a former Olympic training pool and set out to get our sun on. Sometimes you’ve just gotta jump in the water to wash off the dirt. Live life; love life. Venting some frustration in the pool

Want to learn more about teaching English in Laos? Visit an information session near you or download our free course guide!

adventuredrivingLaosTravelWhere in the world are Magda and Brent

What’s It Like Living in Japan as an ESL Teacher?