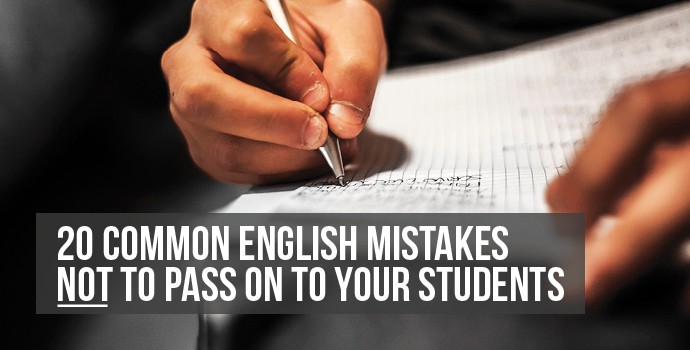 It’s easy to use regional dialects or commonly misused language mistakes when speaking everyday English. However, when teaching a second language to new students, it’s important that you’re giving them the proper foundation from which to build their habits. This includes your own speaking and writing habits in the classroom. The following are 20 common English grammar mistakes you might not even know you’re making:

Once you’re done with these, check out Part 2 for even more English grammar mistakes and tips!

Used in a sentence: Anyways, I went in the other direction.

A correct use of anyway would be: We don’t need that anyway!

Anyways is not a word.

This is the “have, has and had” series that can trip people up. Present perfect is used to show something that has happened in the past and continues into the future, or to show how long something has happened. For instance, “I have worked as a teacher for 10 years” or “I have lived in New York since 1998.”

Towards is typically not used in America. However, British English uses towards more often than toward. So, before you discredit either version, just think about its origin.

Take, for instance, this sentence: He must stay with her!

Used in a sentence: Riley said goodbye to Emmitt and me.

Does it make sense if you take “Emmitt and” out? “Riley said goodbye to me.” Yes, it does!

Used in a sentence: She and I fell asleep under the stars.

Does it make sense if  you take “She and” out? “I fell asleep under the stars.” Correct.

Used in a sentence: Eli and me baited our own hooks.

Does it make sense if you take “Eli and” out? “Me baited our hooks.” Me has been used incorrectly.

Used in a sentence: Your decision affected me.

Used in a sentence: What effect will this have on me?

Note: Thanks to a reader’s input, it’s important to note that both words can be used as both a noun and a verb. A definition of the words might be helpful:

Affect, according to dictionary.com (who helpfully used the word “effect” in the definition), is (v1) to act on; produce an effect or change in, (v2) to impress the mind or move the feelings of, or (v3) (of pain, disease, etc.) to attack or lay hold of. As a noun, the definition is, a (n1) feeling or emotion, or (n2) an expressed or observed emotional response.

Effect, according to Merriam-Webster.com, means (n1) a change that results when something is done or happens; an event, condition, or state of affairs that is produced by a cause, (n2) a particular feeling or mood created by something, (n3) an image or a sound that is created in television, radio, or movies to imitate something real. As a verb, the definition is (v1) to cause to come into being, (v2a) to bring about often by surmounting obstacles;  accomplish, or (v2b) to put into operation.

Used in a sentence: I can spit farther than you can.

Used in a sentence: Please don’t take this line of thinking any further.

Note: While there is a difference between the two, it’s not a hard and fast rule that everyone follows. They are sometimes used interchangeably without fault.

Because these two sound so similar, it’s easy to use mispronounce one over the other. Accept as a verb means “to consent to receive,” whereas except, is used sometimes as a verb, conjunction, and a preposition, and means “to exclude.”

Used in a sentence: You need to accept my decision.

Used in a sentence (preposition): Everyone can go, except John.

Used in a sentence (verb): Who’s going with me, present company excepted?

Used in a sentence (conjunction): They look the same, except that he is younger than her.

This is an old conundrum that has confused people for years. Here’s the breakdown:

Used in a sentence: I just want to lie beside you.

Used in a sentence: You can lay the book on the end table.

Used in a sentence (past): After I got home last night, I lay down for a couple of hours before
going out.

Used in a sentence (future): After I get home tonight, I will lie down for a couple of hours before going out.

Used in a sentence (past): I laid the book down on the table after I finished it.

Used in a sentence: It was the book that did it.

Used in a sentence: It was the chief of police who did it.

This, however, isn’t a hard and fast rule. It would also be acceptable to say, “The boy that got away is my cousin.” Who would work too, but it’s not incorrect to use that. Which is also often included in this issue but mostly, though not exclusively, refers to groups or things.

Used in a sentence: He bought a new car, which is red just like mine.

Moot is most often used in a sentence to describe something that is superfluous. Like, “It was a moot point.” Interestingly, this not the correct usage of the word.

According to dictionary.com, moot is defined as a subject to debate, dispute, or uncertainty, and typically not admitting of a final decision.

Used in a sentence: The subject of urbanization was a moot point with the aging council.

Than generally makes a comparison while then is used as a time construct.

Used in a sentence: I can run farther than you.

Used in a sentence: In the morning I first get out of bed, then I make breakfast.

According to Grammar Girl, this is one of those differences that only sticklers hold to, but it’s interesting that we’ve been using the words incorrectly. Nauseous means to make sick, whereas nauseated is how we feel.

Used in a sentence: That smell makes me nauseous.

Used in a sentence: I feel nauseated.

Used in a sentence: I saw a one-legged man.

Used in a sentence: This is an unmitigated mess!

Used in a sentence: He made an honest mistake.

This is a nonstandard English word, which means it’s not the correct word. You can use regardless or irrespective, but irregardless is not a word.

Used in a sentence: Irregardless of what you do, I’m going to the game. Incorrect.

Used correctly in a sentence: Regardless of what you do, I’m going to the game.

This has become a popular word in America to give a sentence more gravity even when using the word incorrectly. Literally describes what actually happened. Consequently, when someone says they literally lost their mind, they are either a walking miracle or they are speaking figuratively.

Used incorrectly in a sentence: He literally blew up at me.

Used correctly in a sentence: The cat literally jumped two feet in the air.

The actual phrase is “could have,” but when people speak quickly, the natural tendency is to pronounce have in unstressed contexts, which in turn, sounds like “of.” The confusion comes when someone writes it down. The correct way to pronounce and write it out would either be to use the actual verb have or to simply use the following contractions: could’ve, would’ve, should’ve.

Although they sound the same, they don’t come from the same word. Baloney means it is a lie. Bologna refers to the type of meat.

Used in a sentence: That is baloney!

Used in a sentence: Is that a Bologna sandwich?

Used in a sentence: I seen him yesterday. (Incorrect)

Used in a sentence: I saw him yesterday.

Used in a sentence: You seen where I live. (Incorrect)

Used in a sentence: You have seen where I live.

These are just a few of the common English mistakes we make. Fortunately, by getting a certificate with Oxford Seminars, you’ll have a much better understanding of these challenging words and phrases. Interestingly, as an ESL teacher, you will quickly become aware of little nuances of the language you thought you knew so well.