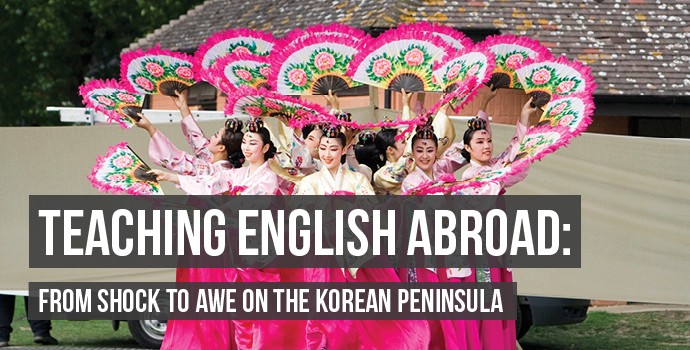 Teaching English Abroad: From Shock to Awe on the Korean Peninsula

Imagine strange shapes glowing neon on billboards, bizarre sounds emanating from the hustle and bustle of the crowds surrounding you and the odd smells of foods you’ve never even heard of, let alone tasted, wafting through the air. This is the sensory overload I experienced upon my landing at Incheon Airport. I was about to embark on a year of teaching English in South Korea, and the cultural transition was almost overwhelming.

(This post is part of an ongoing series of guest blogs sent by individuals who have experienced life abroad as a TESOL/TESL/TEFL educator. We would love to share your story. Interested? Email us at my_story@oxfordseminars.com!)

I wasn’t sure quite how I would manage to survive the initial culture shock of living in a place with a language I could neither speak, nor read. It was also quite daunting to face twelve months of meals served up from a completely new cuisine. As it turned out, there was no need to worry; my adjustment was surprisingly seamless. I arrived in Gongju, South Korea to take my position as an ESL teacher just as Chuseok – Korean Thanksgiving – was about to begin. While I found the peculiarity of the culture mildly overwhelming, it was quickly surpassed by the genuine hospitality of the people who lived there. Almost as soon as I arrived in Gongju, my employer whisked me away to enjoy a veritable feast at his family home.

Some of the local foods never grew on me, but most did. The generous nature of Koreans, on the other hand, didn’t need to grow on me, it was a welcome change from the start. I’ll never forget sitting at a bus stop when a kind matronly figure, who was selling produce on the side of the road, approached with a smile and gave me a heaping handful of chestnuts to take home. Though we didn’t speak the same language, I was reminded that the kindness of sharing is universal. The highly colorful and elaborate costumes of the Baekje Culture Festival. (Source: PatricksTravels)

The hardest thing about moving to South Korea to teach English, was the fact that I didn’t know a single soul. Thankfully, the initial bout of loneliness was quickly overwhelmed by the colorful costumes and scintillating sounds of the Baekje Cultural Festival, which took place just weeks after my arrival.

In celebration of Gongju’s time as the capital of Korea’s Baekje dynasty, visitors from all over the country came to enjoy spectacular dance shows, music and wrestling matches at the historical fortress. Enchanted by the brilliant colors of the dancers’ wardrobes and swiftness of their maneuvers,  I wandered the streets of my new city for days soaking up the culture. My curiosity was rewarded with views of the extravagant costumes of the traditional parade as well as festival songs and fascinating insight into the local history. To my surprise and delight, by the end of the festivities I felt like part of a community. All I needed to do was introduce myself to fellow foreigners and they invited me out on the town.

My Korean coworkers were also happy to introduce me to the local scene. They took me to their favorite restaurants, helped me find the best markets, danced the night away at local clubs and even joined me for a night out at a baseball game. Needless to say, I quickly fell in love with my surroundings and took advantage of the cultural spectacles and magnificent landscapes for the rest of the year.

Enjoying Activites Outside the City The island of Jeju is known as the “Hawaii of Korea.”   (Source: Republic of Korea)

When I wanted to get outside the city, I enjoyed hiking at nearby Gyeryong Mountain, lounged on the provincial beaches and ferried to explore the islands, including the breathtaking waterfalls and volcanoes of tropical Jeju. Living only one-and-a-half hours south of Seoul, I regularly bussed north to take in the vibrant nightlife of the world’s second-largest metropolitan area.

A recollection of my time on the peninsula wouldn’t be complete without recalling the smiling faces of my students. I may not have arrived as a seasoned ESL teacher, but the constructive criticism of my employer surely helped me leave as one. While every job has its ups and downs, teaching in Korea will always be a fond memory. When I think about the fun we had in the classroom, it brings to mind the satisfaction of seeing a young learner practically master a second language.

Even beyond the goal of teaching English as a second language to native Korean speakers, it was equally interesting for me to study the local language. Many foreigners claim Korean is difficult to learn, but I found the new alphabet to be quite accessible with time spent studying it; the written language is as phonetic as they come. The modern Korean hangul alphabet is said to have been developed by academics at the direction of King Sejong in the mid-1400s. According to research, the king felt that the Chinese characters used to write at the time were so difficult for the commoners that only privileged upper-class citizens were able to read and write fluently. The majority of Koreans were basically illiterate before the invention of Hangul, which necessitated the design of an easy-to-read alphabet. I may not be able to speak the language fluently, but I can read a menu or a street sign, which goes a long way in a foreign land.

My time in Korea was not just an amazing adventure, it was also an amazing opportunity to position myself better financially. Due to the free housing and relatively low cost of living, I was able to save about $1,000 a month of my salary to put towards my student loan payments. By the end of my year in Korea I was not only debt free, I had money in the bank.

In my final month, I received not only my last month’s wages, but also a severance pay equal to one month’s salary,  and a full refund of all pension plan contributions. Since the pension plan was funded jointly by myself and my employer, but I was able to receive the full amount when I left, I was able to receive a closing payment of around $6,000 when my teaching job ended. My lack of debt, combined with my final month’s earnings allowed me to fulfill my dream of traveling to Central America where I eventually took up residence in the highlands of Jinotepe, Nicaragua.

If you are interested in teaching English abroad and learning more about how to take on an adventurous career while also boosting your savings, Oxford Seminars is here to help you make the most of your ESL career.

For more information on becoming TESOL certified, request our free information package. Or, download our Expat’s Guide to Teaching ESL in Korea!

The Best Things to do in Chiang Mai, Thailand