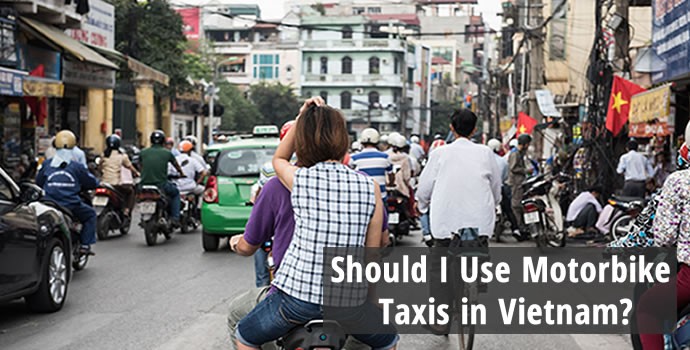 Should I Use Motorbike Taxis in Vietnam?

Traveling in Vietnam is an unforgettable experience. Hanoi, where I was living and working, is a big bustling crazy city. The traffic was like nothing I have ever seen before. There were about 500 motorbikes to every car on the road. The roads looked like they were filled with salmon rushing upstream to spawn.  There were buses and occasional SUVs all surrounded by hundreds of bikes.  The chaos, upon first viewing, didn’t seem to be governed by any rules that I could discern. Everyone who had a horn used it incessantly, they honked to inform other riders they were coming, that they were there, and that they were leaving every intersection, or so it seemed.  A first, it was a constant cacophony that put me slightly on edge, I heard every horn individually as if it were directed at me, but eventually I didn’t even notice them, they became a din, a soothing white noise.  During those first few weeks, to my eyes at least, it never seemed like anyone got anywhere, they were just always going.

Using a Motorbike Taxi in Vietnam The glowing Hanoi skyline at night

For budget reasons, it became impossible to continue to take the comfortable and safe car taxis around the city.  Motorbike taxis were offered at every corner.  Men on nearly every corners would raise their hand to you and say, “Motorbiiiii?”.  You could just get out of taxi or off a bus, and there would be a man there offering you a ride, smiling. Anyone who has spent even a day in Hanoi can recall this common refrain.  They were cheaper than a normal car taxi, and although they weren’t as cheap as a bus, they took you to any exact destination you needed to get to.  It was intimidating to say the least, but I finally mustered up the confidence to get on one, reminding me of that first daring step in line for the upside down loopdy-loop roller coaster as a kid.

You get on the back of the bike and grab at the handles just behind your back at the end of the seat, and off he goes into the river of traffic.  Somehow space magically opens for another bike to join the current.  Surrounded by the sounds of engines of hundreds of bikes competing for space, your driver carefully navigates into the maelstrom.  You rush into each intersection and brake hard into an almost slow motion stasis, almost to a stop, but not quite. The driver employs dozens of the tiniest and most delicate maneuvers: a slight lean to the left, a tiny turn, leaning in, tapping the brake or applying the throttle gently to avoid tiny collisions which would bring the whole intersection to a stop, upsetting the carefully orchestrated and beautifully improvised flow of the city.

Miraculously, there are few collisions, and then you’re off speeding down the next straight away, searching for holes in the current, again, braking, halting, balancing, and joining the next deliberately delicate dance at the next intersection.  After arriving at my school after my first venture on a motorbike taxi, I was never so glad to feel pavement under my feet again.  After just a few rides though, the concern completely evaporated and I sat back and really enjoyed these rides, watching in awe as my skilled driver navigated the swarm of motorbikes.  Of course, there were always close calls, very close calls, but once you understand the rhythm, you learn to balance with the driver to further remove any danger of falling or hitting another bike.

After this experience, I always try to remember, no matter how crazy the road seems, or how careless the driver seems, they do this every day, they know the roads, they know the rules, they know how it works. It’s their job, and you are just a blip of a moment in the context of their every day.

To Learn more about teaching and traveling in Vietnam and other exciting destinations around the world, check out our Where You Can Teach page! Kevin McLaren taught English overseas for 2 years in Thailand, Vietnam, and Taiwan.  He has been teaching ESL for 10 years.  Kevin has a Master’s in Education. He currently teaches English at Tacoma Community College in Tacoma, Washington.