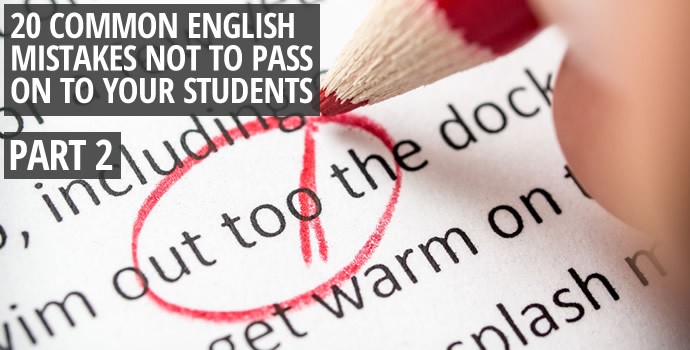 In July 2015 we published a blog post about 20 Common English Grammar Mistakes Not to Pass on to Your Students. The post provoked substantial discussion about the correct usage of many of the terms that it highlighted. Here are 20 more common errors to avoid passing on to your students:

In colloquial American English using yet and already with the past simple tense is common and widely accepted. It should, however, be combined with the present perfect tense.

Incorrect usage: I already went or you didn’t eat yet

Correct usage:  I have already gone or you haven’t eaten yet

This may appear like nit-picking, but the textbook that you will use in the classroom is likely to say the same thing, and you do not want the students to catch you making this error.

Excessive use of the word like adds nothing to our speech, and can sometimes obscure meaning.

Used in a sentence: this is, like, a great movie

Incorrect usage: I could care less about it. It is of no importance to me

Correct usage: I couldn’t care less about it. It is of no importance to me

4. Less instead of fewer

Often native speakers use less when they should use fewer.

Incorrect usage: there are less people here than yesterday

Correct usage: there are fewer people here than yesterday

A principle is one of a set of core values.

Used in a sentence: kindness is one of my guiding principles

Principal, on the other hand, has two meanings. The first is that of a head or a leader. This is a noun.

Used in a sentence: the principal at my high school was very strict

To confuse things further, principal is also an adjective. It means the first or the most important.

Used in a sentence: his principal concern was about the noise

Apostrophes can change the meaning of a sentence significantly.

Incorrect usage: there are 250 girls here. The girl’s bedrooms are on the right

Correct usage: there are 250 girls here. The girls’ bedrooms are on the right

Used in a sentence: she advised me, but her advice was bad

Used in a sentence: it took them years to devise a suitable device

We use that with identifying adjective clauses.

Incorrect usage: I like the car which has blue stripes

Correct usage: I like the car that has blue stripes

We use which with non-identifying adjective clauses.

Incorrect usage: we visited New York, that is a big city

Correct usage: we visited New York, which is a big city

Here the relative clause – ‘is a big city’ – does not help to identify the object of the main clause (New York). In this case, the clause merely adds extra information. The relative clause, therefore, is non-identifying and we must use which. With which it is necessary to use a comma.

We cannot use double negatives in English.

Incorrect usage: I don’t know nobody

Correct usage: I don’t know anybody

I.e. and e.g. are two common Latin abbreviations in English. E.g. equates to ‘for example’.

Used in a sentence: there are many types of fruit, e.g. apples

I.e has an entirely different meaning. It means ‘in other words’.

Used in a sentence: I visited the Big Apple, i.e. New York

Semi-colons are used to show a link between two standalone clauses.

Used in a sentence: I felt sick; I had just woken up

Here the semi-colon is used to indicate a connection between the two clauses. Without a semi-colon they are two facts that may or may not be linked. Semi-colons can also be used to break up more complicated lists.

Uninterested is similar in meaning to bored.

Used in a sentence: I was uninterested in the drab painting

Disinterested is similar in meaning to impartial.

Used in a sentence: a referee should be disinterested in the game

Inflammable has the same meaning as highly flammable, and does not mean that something will not burn easily.

Incorrect usage: it is ok by the fire, the label says its is inflammable

Correct usage: don’t put it near the fire, the label says it is inflammable

14. Conjunctions at the start of a sentence

Conjunctions connect ideas. We should not, therefore, use conjunctions such as and, but and or to start a sentence.

Incorrect usage: we met up with him. And then we drank a beer

Correct usage: we met up with him, and then we drank a beer

Its is a possessive pronoun much like his or her.

Correct usage: its interior is clean

It’s is a contraction of ‘it is’ or ‘it has’. It’s is never possessive.

16. Yourself instead of you

Yourself is not a more formal version of you. You is a subject or object pronoun. Yourself is a reflexive pronoun.

Incorrect usage: I have not spoken to yourself before

Correct usage: you are looking at yourself in the mirror

Your and you’re are pronounced in the same way, which is why they sometimes cause confusion.

Incorrect usage: your a little rascal, and so is you’re brother

Correct usage: you’re a little rascal, and so is your brother

Your is a possessive pronoun and is always combined with a noun. In the above example it is combined with the noun ‘rascal’. You’re is a contraction of ‘you are’.

When we use the second conditional in English we should use were instead of was in all cases.

Incorrect usage: if I was older, I could drink alcohol

Correct usage: if I were older, I could drink alcohol

This is also true of the structure ‘I wish + past simple’

Incorrect usage: I wish I was a superstar

Correct usage: I wish I were a superstar

Dangling participles can confuse the meaning of a sentence.

Used in a sentence: visiting relatives can be tedious

It is not clear what the subject of the sentence is. It could be ‘relatives’ or ‘visiting relatives’.

Be careful when using the comparatives.

Incorrect usage: the red one is more easy than the green one

Correct usage: the red one is easier than the green one

Many new and prospective teachers worry about understanding and using the correct grammar rules. Fortunately, a TESOL/TESL/TEFL Certification combined with proper practice will help you learn grammar rules and catch mistakes before passing them on to your students.

In case you missed it, check out 20 Common English Grammar Mistakes Not to Pass on to Your Students (Part 1). Do I know enough about English to teach ESL overseas?