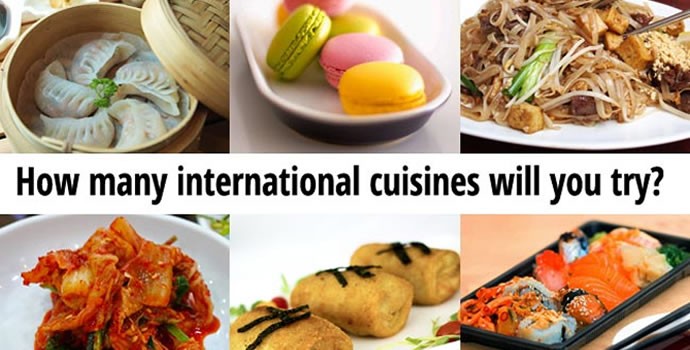 Teaching English overseas offers a wide variety of benefits for every teacher. Whether you’re into traveling and exploring a different landscape, gaining work experience and making money, or making a difference in the lives of others, there is something for everyone. But there is another benefit that should never be overlooked: The food.

Traveling and teaching English abroad is the best way to sample all the food a culture has to offer. There are so many different foods to experience, each with their own regional varieties and styles. Many ESL teachers travel to multiple countries just to try as many different dishes as they can.

Not sure where to start? Check out the list below for some must try foods from 6 different countries. While some of these are available at home as well, nothing compares to tasting a food while exploring its country of origin at the same time. A staple Korean side dish, made from fermented vegetables, which dates back to the Three Kingdoms era (37 BC – 7 AD). Kimchi is served with almost every meal in South Korea. There are many variations made from different seasonings and vegetables. There are also different varieties available depending on the region and time of year. Most often, Kimchi includes napa cabbage and Korean radishes mixed with chili powder or ginger. Thailand is famous for its street food. Big cities like Bangkok are home to a wide variety of open air markets and food vendors. These vendors serve all kinds of dishes on the street from stalls and carts, or from the canals by boat. You can find everything from fruit and snacks to cooked noodle and rice dishes. One of the most popular of these dishes is Pad Thai: a street food of Thailand that became popular in the country during World War II due to a shortage of rice. Since then, Pad Thai has become one of Thailand’s national dishes, consisting of rice noodles and a wide variety of ingredients such as egg, tofu, fish sauce, dried shrimp, garlic, and palm sugar. A Traditional Chinese Cuisine that has been enjoyed since the Tang Dynasty (618-907). A dough wrapper is filled and sealed in a simple triangular shape then boiled. Wontons are commonly served in soup and often filled with pork or shrimp, but can be seasoned with a variety of spices, garlic, or vegetables.

Different regions of China bring their own varieties of wontons. In Hong Kong, wontons come in a variety of sizes and can be filled with bamboo shoots as well as the traditional pork or shrimp. This gives them a distinct crunch. This delicate pastry has been produced in monasteries since the 8th century and became famous during the French Revolution. These sweets are made up of two almond meringue shells glued together with a variety of fillings such as butter cream, ganache or jam filling. They also come in a wide variety of flavors and colors. A popular tapas dish in Spanish cuisine, derived from the croquette recipe first made in 1691. Croquetas are deep fried rolls covered in bread-crumbs and traditionally filled with ham or mashed potatoes and covered with thick béchamel. Some eateries may offer versions with other fillings such as ground beef, cheese, or vegetables. This well-known Japanese cuisine originated in the Edo period (1603 – 1868) and gained popularity in Tokyo in the 1820’s. Specially prepared rice can be combined with uncooked seafood such as fish, shrimp, eel, or octopus and seaweed wrap to create a wide variety of different rolls and flavors. Common ingredients also include vegetables such as avocado and cucumbers, and occasionally tropical fruits.

Hopefully this has whetted your appetite for food and for travel. You owe it to your taste buds to try them all!