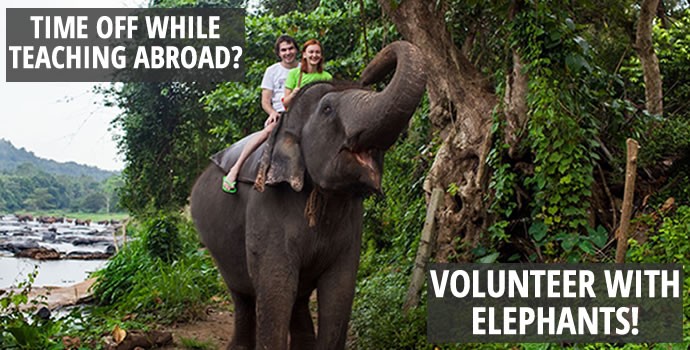 Time Off While Teaching Abroad? Volunteer With Elephants!

Volunteer With Elephants in Sri Lanka!

About five years ago when I was teaching English at a college in Oman, I spent part of my summer vacation in Sri Lanka. The Millennium Elephant Orphanage there advertised for volunteers to work with their seven elephants in Kegalle, a town about an hour from the capital city of Colombo. I didn’t mind paying the $800 fee, as it seemed minimal for the privilege of working with elephants and these fees were one of the ways the orphanage supported itself. I stayed with three other female volunteers–from Denmark, Ireland and the U.S.–at the home of a Sri Lankan family. Our Sri Lankan host mother provided us with three delicious meals a day of traditional curry and rice plus very sweet tea and showed us how to tuck our mosquito nets around our mattresses. One of the elephants on its way to the river

On a typical morning we four volunteers would walk single file beside the narrow road that led to the orphanage. Summer is monsoon season, so the air was always heavy with moisture and it sometimes rained on us as we walked. Tuk-tuks would speed past us, sometimes narrowly missing one of the street dogs which Sri Lanka sadly has a great abundance of. We occasionally also saw water monitors—giant lizards about six feet long and very common in south Asia—swimming in canals or even walking on the street!

There were a total of fourteen volunteers at the orphanage, so two of us were assigned to each elephant. Amy, my Irish roommate and I, were assigned to Rani, a middle-aged female elephant whose name means “queen.” The first order of business in the morning was to clean our elephant’s bed. Actually, our job was two-fold: 1) To remove the large amount of elephant poop that had accumulated over night, tossing each “loaf” (each piece does look like a free form loaf of bread) out of the bed into the surrounding greenery and 2) to check her health indirectly by inspecting and counting the loaves.

Mid-morning we usually bathed the elephants. For safety reasons none of the volunteers was allowed to approach the elephants without a mahout–a man from a centuries-long tradition in Sri Lanka and other south Asian countries, who trains and takes care of elephants, sometimes working with the same elephant his entire life. Amy and I would meet up with Rani and Upali, the mahout in charge of her, and walk with both of them to the river which ran through the orphanage grounds. As we walked, Upali would give commands to Rani and tap her on the flank with a stick. Her movements were slow and majestic. She would wade into the river and as if in slow motion turn and drop, making quite a splash and then relaxing her enormous body in the cool water. As instructed, Amy and I would wade into the river knee deep and then wash her rough hide–up and down, all around her belly and legs, her ears and head. Bathing Rani was always the highlight of my day.

After lunch it was time to give the elephants their vitamins. The pills, surprisingly, were the same size as vitamins humans take but elephants need a lot more of them. To prepare the vitamins, we mixed a handful of wheat flour with water to form balls a little smaller than a baseball, then cut each ball in half and pressed about fifteen or so vitamins into the two halves, embedding them so they wouldn’t fall out. Joining up the two halves we made one large piece that could easily be placed in an elephant’s mouth. Each mahout would walk his elephant up to a platform where one of the volunteers stood at equal height with the elephant’s head. When it was my turn, I leaned over and lay the ball of wheat in what I thought was a surprisingly pink and very soft mouth. Tourists would often come to the orphanage to take elephant rides. While some people think it is exploitative to use elephants in this way, the work was easy and without income from the rides the orphanage may not have existed at all. The only thing that saddened me was the lack of an enclosure where the elephants could walk freely or spend time together without humans. As it was, when the elephants were not working or being bathed, their legs were almost always chained. Fortunately, I did once see two elephants that were being bathed at the same time raise their trunks and touch the ends in the air as if they were holding hands or kissing.

Volunteering with elephants is just one of the many things you can experience while teaching English abroad. Traveling and exploring during your time off from teaching is a great way to see your new country and often the countries around it as well. It not only allows you to travel to exciting and exotic locations, but allows you to do things you never imagined you could.

To Learn more about teaching English abroad, speak with an instructor at a free information session, or download our course guide!