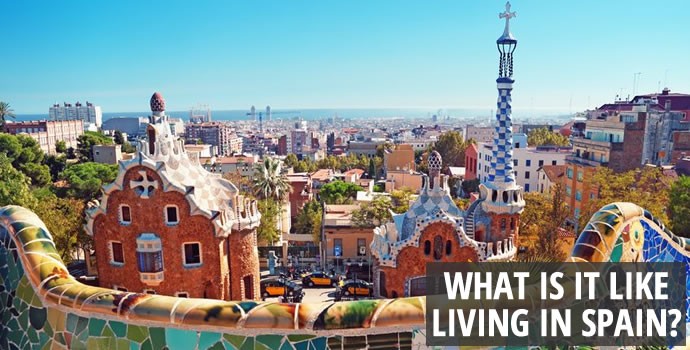 What is it Like Living in Spain as an ESL Teacher?

“In Spain I’d visited Tarragona with its Roman amphitheater and Merida, with its preserved theater…Of course, Barcelona had much to offer with its location near mountains and on the sea.  Sitges, a gorgeous beach town, was half an hour away, and I hiked many of the mountains in the Pyrenees…I will always be grateful for the opportunities I had to visit so many wonderful spots in Europe.” –Teresa Peipins, Oxford Seminars Instructor Early morning on the beaches of Sitges, Spain

Here you will find a thorough guide to what it is like living in Spain, from housing, to transportation, to food, etiquette, and culture.

Famous for the sun-drenched beaches of Malaga and Huelva, the unique architecture of Barcelona and Madrid, and penchant for a good time, Spain is a perfect choice if you like excitement, history, and the beach. The ESL market in Spain is not as expansive as in other countries, but those who do land a position will be sure to enjoy their stay. Long sandy beaches, historic sites, and paella are a few of the wonderful experiences awaiting you in Spain. If you have an EU passport, you will have a relatively easy time finding jobs once you arrive in the country.

Finding a Home in Spain

Like many countries in Europe, finding an apartment in Spain can be a difficult task. It’s rare that an employer will be willing to pay for housing, unless you are applying with a homestay program. However, schools can still be a great resource to point you in the right direction. Finding an apartment in a central area of a large Spanish city will be expensive, yet it will relieve any worries concerning transportation.

Depending on the area where you live, many Spanish apartments are older and lacking in modern conveniences, such as air conditioning, heating, elevators, or Internet. The more modern conveniences that are available in an apartment typically have a direct correlation to the cost of the apartment.

With the number of people interested in teaching English in Spain, employers do not feel the need to compensate teachers for airfare. Many airlines travel directly from major cities in the US to Madrid or Barcelona, although they can be pricey. Other options include flying to a major airport on the Atlantic side of Europe and transferring to a flight heading to Spain from there.

For the most part, cell phone, high-speed Internet, and paid television services are all available within urban regions of Spain. Certain rural areas lack some electronic conveniences that Americans live with every day. If you hope to bring electrical appliances with you, ensure the appliances can operate at 220V, and purchase a Type C plug adaptor. Gran Via, the main shopping district in Madrid

The Spanish people are covered by a universal healthcare system called the Sistema Sanitario Público. In addition to the public healthcare system, many use private clinics located throughout the country. User fees for these clinics are paid out-of-pocket or through private health insurance.

The transportation system in Spain is very extensive, making travel throughout the country quite easy. Consider the following options to safely get you to your destination:

Most cabs in Spain do not have meters in their vehicles. Rates are decided by city officials and displayed on the cab, allowing for some of the cheapest taxi prices in the world.

When a taxi is available, the driver will display a green sign or shine a green light on the car’s roof. Many restaurants and bars encourage their patrons to ask a staff member to call a cab on their behalf to ensure that customers arrive home safely. Beware of taxi drivers who charge extra fees for excess baggage, traveling at night, and other unusual charges. Drivers often target tourists and other foreigners for extra money.

Many Large Spanish cities like Barcelona and Madrid have subway systems. Subways in Spain are very similar to American ones. Color-coded maps can be found in transit stations, making it easy to find your way around.

The railway is another important element of Spain’s transit system. Most urban dwellers have access to light rail to travel around cities. Railroads cover most of the nation, allowing commuters to travel from cities to rural regions and to France, Portugal, and Morocco, via an undersea tunnel.

Most cities in Spain have public bus transit. In order to fit more commuters, buses usually do not have many seats, so riders may have to stand. Spending 1.20 EUR to ride a city bus is typical. With more people around the world becoming concerned about the environment, riding a bike is appealing to many in Spain. Biking through city streets is an excellent way to learn about your surroundings, and take in the sights and smells of Spain. Many bicycle enthusiasts travel to Spain to tour through the various regions.

Applying for a driver’s license in Spain can be difficult. All non-EU citizens must go through a lengthy application in order to get a Spanish driver’s license. For this reason, many choose instead to simply use public transit.

If you wish to drive in Spain you will need to obtain an International Driving Permit (IDP) prior to leaving for Spain, and take out a Frontier Insurance Policy. As requirements can change, contact the Spanish Embassy to confirm regulations.

Once an IDP has expired, you will need a Spanish driver’s license. To obtain one you must take a driving course, a vision and medical test, a written exam, and an in-car test.

Two to four-hour lunch breaks (called siestas) are common in Spain. However, since joining the European Union, many large companies and government branches are eliminating the siesta tradition to match the business schedules of other European nations. An example of delicious seafood Paella

What to Eat in Spain

One of the great things about teaching in Spain is the food. Spain is surrounded by water, and as such, many Spanish dishes contain seafood. With much of Spain’s culture being centered on its food, you can expect many long meals enjoying foods like gazpacho, calamares, jamón serrano, and many tastier treats. From Catalonia to the Canary Islands, each region of Spain adds their own spin on Spanish cuisine and offers dishes truly unique to their region.

While breakfasts are often simple, the real eating begins during lunch when the siesta begins. Most dishes in Spain are not shy on olive oil and garlic. When the siesta time arrives, the streets are filled with fragrances circulating from nearby restaurants and tapas.

Some of Spain’s more popular dishes include:

Types of Coffee in Spain

Spain is also famous for its coffee.  So coffee addicts should be sure to indulge in the wide variety of coffee available throughout Spain. See the list below for a few examples of how coffee is served in Spain. Enjoy an espresso at cafe in Barcelona

For a country of its size, Spain has a diverse climate that can be broken up into three types: Mediterranean, Oceanic and Semiarid. How to Get a Job Teaching English Abroad

While finding positions in Spain can be difficult, teaching in the country offers a fantastic opportunity to explore the rich culture and breathtaking vistas. Oxford Seminar’s Job Placement Service provides assistance with finding teaching jobs at ESL schools in Spain and around the world. We have formed partnerships with language schools worldwide that are searching for certified ESL teachers. Our Job Placement Advisors provide timely job placement assistance to help make your experiences abroad as rewarding as possible.

Great Ways to Save your Money in Spain