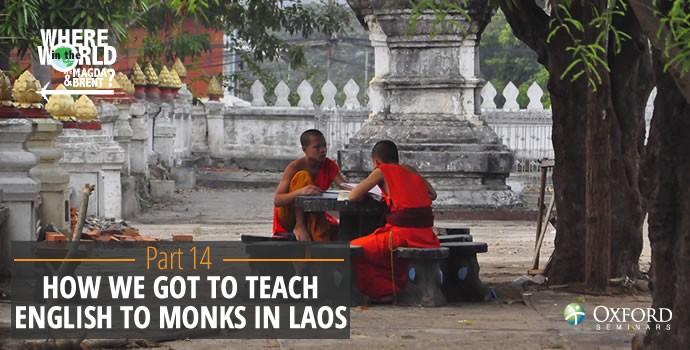 How We Got to Teach English to Monks in Laos

An Unexpected Opportunity to Teach English in Laos

After our harrowing escape from the jungle tree house during the Gibbon Experience zipline adventure, we returned to Huay Xai for one more night before heading for Thailand. On the zipline trip, we shared our treehouses with two French travelers who had stayed in Huay Xai for a few nights earlier. They filled us in on some of the sights and scenes of the town, one of which turned out to be one of the coolest experiences of our trip thus far. Upon hearing that Magda and I were both English teachers, they said we should definitely go check out this little program at the temple overlooking the city called Monk Chat… A few years ago, a young monk from Luang Prabang arrived in Huay Xai with a particular interest in improving his language skills to talk to others from around the world. He spoke with one of the elder monks, and the elder gave him a novel way to augment his home study through books and audio files: he should invite travelers and tourists to come chat with him for a while and help him practice his English…and German, French, Spanish, Chinese, Korean, and Japanese. He was a very avid student of languages!

At 7pm each night, this eager monk sets up a sign and sits at a table for anyone to come join him. Once we heard of this, we felt almost obligated to put our TESOL training to work and have a chat with the linguistically appreciative monk. We found our way to the temple, and after a few minutes walking around and taking a look, we set out to find the monk who likes to chat. We were a little nervous at first since we A) weren’t sure which monk he was and B) didn’t really know how this whole thing worked or if this monk even really existed. But sure enough, after a few minutes of looking curious and interested enough in the goings on at the temple, we were approached by a teenage monk who quickly guided us to a table to sit down. Another young monk came and introduced himself as Keon. He thanked us for coming, and asked if we’d mind talking for a little while.

We chatted about a myriad of topics while other monks, young and old, drifted in and out of the conversation, some were too shy to participate, so they just flitted about on the perimeter and listened in, while others stepped right up with a particular question they had about us, English, or the world in general. Keon filled us in on the day-to-day life of a monk in Laos, as well as how he came to be involved in the monastery, his plans for the future, and all about his life. It turns out that not only is he a hardworking, self-taught student of languages, but he is also teaching himself physiology in the hopes that he can one day earn a scholarship to study medicine! An amazing person with a genuine fire for knowledge. He’s also a top-ranked Muay Thai competitor as if he wasn’t impressive enough already.

We helped him and his colleagues with a few pronunciation and vocabulary issues they asked us to work through, and then we fell into a general conversation about travel, politics, food, soccer, and even hockey! He was our kind of monk.

After 90 minutes or so of chatting, we bade the monk farewell and headed off. His command of so many languages, all learned through self-study and casual interaction was an inspiration for us both as travelers interested in the cultures and people of the world, but also as language teachers. Surely if this young man can put in the time and effort to learn so many languages all on his own, with the guided practice provided by a professionally trained teacher, there is no reason that any engaged student cannot learn the language of their choosing.

If you ever have a student who claims that they just can’t learn English, perhaps tell them the story of the amazing monk who loves to chat. Sometimes you just never know who you’ll encounter on your adventures throughout the world. Live life; love life.

Sign up below to receive email updates whenever Magda and Brent post new content as they continue traveling and teaching in Asia, or follow Oxford Seminars on Facebook, Twitter, Google +, Youtube, or Pinterest to see updates as they explore other must see places in Asia, including locations in Vietnam, Thailand, Laos, and Beyond in their journey across a dozen different countries in between ESL teaching contracts in Taiwan and the Czech Republic.

Want to learn more about how you can teach English in Laos? Visit an information session near you or download our free course guide!

Must See Places in Asia – The Gibbon Experience, Laos