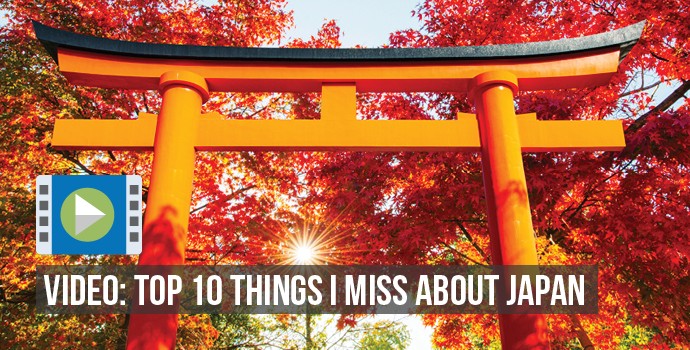 Japan has embraced many areas of Western culture, while with anime and karaoke are just a couple of things North Americans love about Japan. For those of you who are fascinated with the Japanese culture, teaching English as a second language in Japan could be the perfect entree to immerse yourself into a place where ancient traditions and practices meld with new Western influences.

After returning home from teaching English in Japan, Oxford Seminars’ instructor Leah Calder realized she missed the country. In fact, she developed a top 10 list of items that she missed most. These items range from the food to the culture and even the transportation. Find out her complete list in this video:

Visit our Japan information page to learn more about starting your journey as an ESL teacher and teaching English abroad in Japan. If you’re interested in getting your TESOL certification and teaching in Japan, Oxford Seminars can help you on your way!

“These are the top 10 things I miss about Japan:

If they said the train was going to arrive at 3:05, 3:06 actually, it would arrive exactly at 3:06. And if it was supposed to leave in 3 and a half minutes, that is when it left. It was very reliable.

Everywhere! If in the middle of the winter you wanted to get hot chocolate in a container you could go to a vending machine on the corner, and you could put in some money and it was already heated in the can.

They pride themselves on service, and I would walk into a dollar store where I would be greeted by maybe 5 or 6 employees who would thank me for coming. I might walk around, maybe buy something for 99yen (which would be about $1USD) and then they would thank me for profusely as I left.

If you turn over things that you have around your house it might say Made in Japan; you can probably get that a dollar store for 99yen. Fabulous stuff there, not anything like the ones that we have in North America.

Every year in the Spring, they have cherry blossom festivals where you go out and sit under the trees and you drink some sake. On the news you actually watch forecasts that talk about where the cherry blossoms are turning and how much longer they will be around.

You can get some choco-bananas or any kind of seafood on a stick, and it’s delicious and cheap. The fireworks at the festivals, even if it’s a tiny little town, are amazing.

Again, back to the 99yen, you could go to something that was called a kaiten sushi which was a little conveyor-belt that went around with fresh sushi. The stuff that I got there for a dollar is what I would probably pay 3, 4, or 5 times the price here.

#3: A Deep Respect for Teachers

Even as I walked through my little town, students that were not my students would bow, and would say hello teacher/hello sensei. They would thank me as I walked by.

These are the hot springs that they have. After this you’ll be ruined for hot-tubbing. Natural rock settings, just beautiful surroundings, very relaxing. You could also have a sea-salt sauna. They were awesome. I went probably once a week.

Not anything like North American Karaoke. You have your own little room. It’s only your friends; they usually have extra instruments like a maraca or tambourine that you could use. They also had something that was called nomihodai which is all you can drink. So you could have all you can drink, with all you can Karaoke. Generally, it was quite cheap. I think my longest stint of karaoke was 6 hours, and we only stopped because they closed at 3 in the morning.

Those are the top 10 things I miss about Japan.”

What is it Like Living in Spain as an ESL Teacher?