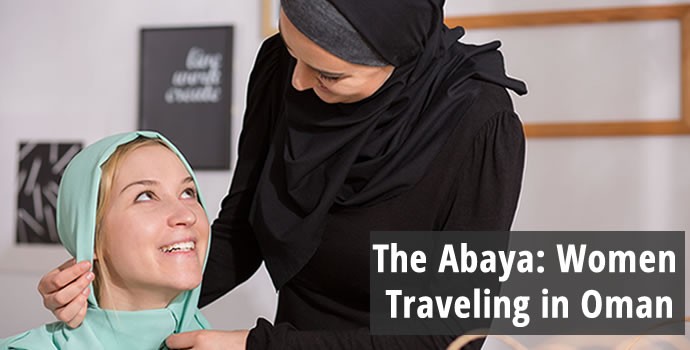 The Abaya: Women traveling in Oman

As a foreign woman traveling in Oman, and one who did not cover her hair, I was constantly stared at by men. They weren’t threatening stares, I soon realized, but curious ones, which at least in part spoke of the locals’ curiosity about me (and about my many colleagues both female and male) as newcomers and obvious foreigners. Although the staring never led me to fear for my safety (as it probably would have back home in the U.S.), it did annoy me sometimes, especially when a large group of men would fasten a collective gaze on me as I walked past. My female students at the college where I worked told me if I wore a headscarf and an abaya, the long black cloak many Muslim women wear over their clothes, men would not stare and I would feel “comfortable” and “relaxed.” Despite their good advice, I stubbornly insisted on the freedom to walk around town in jeans and a T-shirt and let my hair hang long and loose.

I lived in Al Musannah, a small town about an hour’s drive from Muscat, Oman’s capital city. One day on a whim I decided to conduct an experiment: I would dress like the local women to see if I was treated differently. As I did not own an abaya and my only scarves were small and designed to go in my hair, not over it, I first had to go shopping. In the abaya shop that I found, the saleswoman greeted me—rather coolly, I thought—and then went right back to chatting with another woman who appeared to be her friend. This I was used to—Omani women paying little or no attention to me. In fact, I had even assumed for many months that the local women simply disliked me. When I told the saleswoman I was looking for an abaya she and her friend immediately stopped chatting and were suddenly smiling at me, pointing out different styles of abaya, and giving me advice about what would suit me. They also showed me how to drape a scarf over my head and then hold the left side taut around my chin while I draped the other side over the crown of my head. Rarely had I received so much solicitous attention from women in Oman. I was soon the proud owner of an abaya, a head covering that covered both by hair and face (allowing only my eyes to show through), and a pair of black gloves.

The following weekend I left my apartment draped head to toe in black and walked to the corner taxi stand. Surprisingly, the taxi driver was not casually friendly as drivers usually were to me, but respectful in a rather distant way, greeting me in Arabic without looking directly at me.  I had a package with me I was going to mail, and I expected him as usual to point to the trunk, saying in effect, “I’ll pop the trunk, you put the box in.” Instead this driver waited until I was seated, walked over to the passenger’s side and offered to put my package in the back for me. He also barely spoke a word the entire hour-long drive to a mall in Muscat.

At the mall I was delighted and relieved to find that men, instead of openly staring or approaching me, simply walked past me. A few times I looked out the corner of my eye as one passed and saw that he held his gaze straight in front of him without even a glance in my direction. For the first time in Oman I felt pleasantly insulated from the male gaze. What surprised me the most was a woman (dressed in an abaya and headscarf) who after initially walking past me, turned around and gave me a big smile. I realized then that many of the local women who had seemed unfriendly in the past, may simply have ignored me because I wasn’t one of them and perhaps because I seemed not to share their religious values.

After a very enlightening hour of walking around the mall I slipped into a restroom and took off all the black I was wearing and hid it in my purse. Once again I was in my usual weekend outfit of jeans and a T-shirt. Even though I emerged from the bathroom feeling a bit lighter and able to move more freely, I also felt exposed. The men began staring again and, sadly, I felt separated from most of the women by a chasm of cultural and religious difference. My little experiment, though brief and never repeated, did give me the wonderful gift of a glimpse into the Omani value of female modesty and how covering oneself can help rather than hurt women.