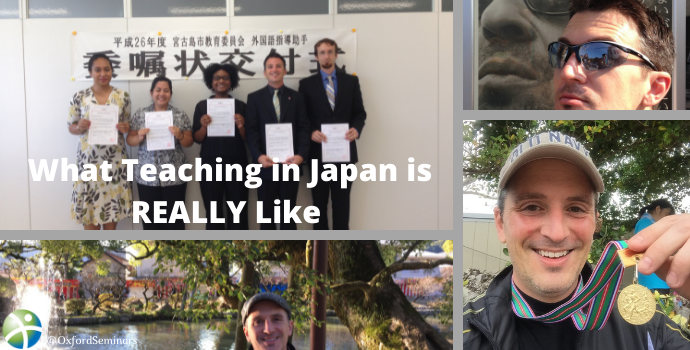 Japan, for many, fires the imagination in ways that other countries just…don’t. Sorry other countries, but you have a lot to compete with: an epic history, an intricate and well-preserved culture with some seriously deep roots, an amazing and unique cuisine, a landscape straight out of a fantasy novel, and some of the friendliest, most incredible people in the world. There is literally something for everyone, from manga to martial arts, museums to modern technology. Japan is one of the top destinations in the world for ESL teachers, for all these reasons and many, many more. After spending over 10 years teaching there, I want to share my experiences and my insights with you. Join me as we explore the ins and outs of the Land of the Rising Sun.

First, a bit about myself. My interest in Japan came about when I started taking Judo as a kid. My knowledge of Japan, up until that point, had been more or less limited to what I learned from the Teenage Mutant Ninja Turtles. Once I started taking Judo classes, however, I was exposed to more and more of that history and culture I mentioned earlier, and a part of me was hooked. I later took Aikido in high school, followed by Karate in university, and by then I’d made up my mind that one day, I would see and experience Japan for myself. And I did. After university, I applied to the JET Programme, which, as you may know, recruits thousands of foreign teachers every year to teach English in Japan’s public schools. Long story short, I got accepted – thanks in no small part to a referral from the teacher at my martial arts school. As of August 2005, I was on my way to Beppu city, Oita prefecture, in lovely southern Japan. Over the course of the next 3 years, I taught Junior High, Senior High, and Special Needs classes as an Assistant Language Teacher, as well as some private lessons on the side. It was an amazing experience, and helped me to forge many lifelong friendships. In 2008, I returned to Canada hoping to find a stable government job, but the economic recession in full swing at that time unfortunately put those plans into a shallow grave. It worked out for the best though, as it motivated me to reapply to JET. In 2013 I was accepted yet again, but this time, to work in the exquisite and one-of-a-kind southern prefecture of Okinawa. I spent 5 glorious years on the island of Miyakojima there, teaching mostly Junior High, and would have stayed longer if the rules had not stipulated a 5-year limit. From there, I taught in Kitakyushu for a further 2 years, working in both an Eikaiwa (English conversation school) and a dispatch company, teaching everyone from kindergarten students to retirees. I think, aside from university classes, it is fair to say I’ve taught just about every type of English lesson that there is to teach in Japan.

Now, to answer that big question “What’s Japan really like?”, I have to begin with the caveat that they drilled into our heads on the first day of JET orientation: EVERY SITUATION IS DIFFERENT. That being said, there are a lot of insights into the country and culture that can help potential teachers prepare themselves, and mitigate some of the inevitable culture shock that outsiders experience when they move there to teach. Let’s begin with the basics. Japan is a modern country, with all the modern amenities that one might expect, BUT these amenities do not all extend to the most rural of rural areas, much like in parts of North America. So, while those teaching in big cities can expect to have high-speed internet, quality cellphone service, clean tap water and stable electricity, the same cannot always be said for those who end up assigned to teach in small country towns. Particularly on small islands that are off the main grids, you may have to rough it a little. Look at it this way though: the more out-of-the-way your community is, the more authentic your experience of traditional Japanese culture will be! Plus, teachers in small towns often get living accommodations that are ridiculously spacious in comparison to their counterparts in big cities. As far as health care goes, Japan has a robust and world-renowned healthcare system, so even though everyone has to pay a small premium, getting adequate care is never a concern.

Next, let’s talk about teaching contracts. JET, as you may have guessed, is the gold standard for English teachers in Japan, offering some of the best salary and compensation packages, especially for those with just a BA (any Major will do, not just English). On par with JET are university positions, but these almost universally require a Master’s degree in English, and those that don’t will offer less attractive compensation. Private schools are another good place to look. These schools are not obligated to recruit JETs, and as such tend to hire teachers directly, offering compensation that is quite competitive. Oxford Seminars grads, with their TESL/TEFL certification, will stand out in comparison to applicants with only a BA, and can often negotiate a higher salary as a result. Similarly, Eikaiwas hire lots of private teachers (read: Oxford grads), but tend to run most of their classes after other schools are out for the day, as a supplement to public education. These schools can also offer a good compensation package, but teachers will usually be expected to work afternoons and evenings, and those applying should make sure that they take this into consideration. Finally, dispatch companies recruit teachers to “hire out” to local schools, as they are needed. These contracts, in my experience, tend to offer the least attractive compensation. Because they take a share of a teacher’s salary as a “finder’s fee”, the teacher’s salary can be 15-25% lower than what they would get if hired by a school directly. It’s important for teachers to understand these distinctions when applying for jobs in Japan, so that there are no surprises. But what about the culture, you ask? Is it really the way it’s depicted in movies and on TV? Well, yes and no. Yes, people in Japan are polite, generous, hardworking, and love to go a little crazy at office parties. No, they do not typically work themselves to death, or have unreasonable expectations of foreigners. In big cities, and in particularly strict offices, you will have managers that really enforce the rules, and tend to press their employees to work long hours. However, this attitude is becoming more relaxed in most areas. While Japanese employees tend to have to work longer hours, they recognize that this is not the standard for foreigners, and do not require ESL teachers to work more than a standard 8 or 9-hour day. Yes, conformity is a fairly big deal. There is, after all, a traditional saying that goes: “The nail that sticks up gets hammered down.” No, they don’t really apply this as much to foreigners. Foreign teachers are expected to conform to certain rules, of course, but are expected to offer a unique perspective; that’s part of their appeal.

Overall, I would say that of all the countries in Asia, Japan has the greatest love affair with the West, and vice versa. For most Westerners, common elements can be found to remind you of home. At the same time, Japan offers a wide range of new and unique experiences, making it a delight to explore. I could write a whole new blog on just the food alone, but trust me, you’ll rarely be bored. So, in the end, what’s Japan really like? The best answer I can give is that, by almost any conceivable measure, it’s like no other place on Earth.