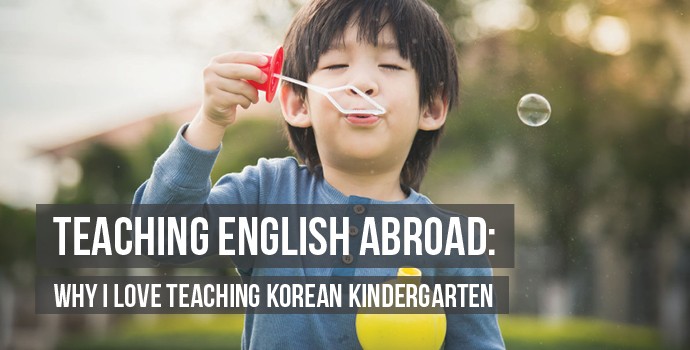 Teaching English abroad is always an adventure, but the adventure takes on a new meaning when teaching kindergarten. You may recall one of my colorful experiences from my previous blog post “Teaching English Abroad: The Evils of Spinsterhood (According to Kindergartners).” Here is another experience from my Korean adventure for your enjoyment:

I think it was in November when I introduced Charlotte Diamond’s “I Am a Pizza” to my Korean kindergarten class. We were all feeling slightly silly since the cold weather had been keeping us inside, and the class clearly needed a few moments to goof off and move around. The song was on topic, since we had just finished a pseudo art project, which required each of the little ones to invent a cooking recipe and provide illustrations. Among my favorite creations were “Fried Miss Julianna,” “Miss Julianna’s Hair Spaghetti,” and “Miss Julianna’s Eyeballs’ Soup.” The illustrations for this final one were particularly disturbing, but just about anything the students were required to write or draw ended up having a “Miss Julianna” theme, as you may recall from my previous post.

The extreme case of this belonged to Kevin (my most fanatic fan), who, whenever we sang songs together, merely said my name to whatever tune was needed. From the moment the music started, all twelve of my little ones were out of their chairs and bouncing along to the music.

“I am a pizza!” sang Charlotte Diamond.

“I am a pee-ja!” echoed Willow Class.

The song was great for taking a break, as it required an echo. The kids could listen to Charlotte Diamond sing the line, and then repeat it. They giggled as they danced and sang to the first verse and, as all of them were quite exceptionally bright, they were able to pick up the words easily (except for Kevin, who staunchly only sang my name).

But, then came the second verse.

I had forgotten that the second verse was sung in French. Nevertheless, the song was a huge hit with Willow Class, and the next morning they all asked in unison, “Can we sing the Pizza Song, Miss Julianna?” Once again we were bouncing about, echoing Charlotte Diamond’s silly lyrics, until we came to the second verse.

Jesus is a pizza. All in unison. No questions asked.

When it came time to select our “Birthday Song,” there was really only one choice. “Birthday Song” was part of an event that happened once a month at the “Birthday Party” where all the kindergarten classes amassed in the library to say “Happy Birthday!” to students with a birthday to celebrate that month. We ate a special lunch, and two lucky classes put on a song and dance to entertain the visiting parents and students. We had great fun putting the dance together, and practice time was the highlight of our days leading up to the performance. I had to cut the French verse from the song in order to accommodate our school’s “English Only” policy, which all the students took very seriously. But this was clearly for the best, given the Willow Class interpretation of the inscrutable lyrics. Our performance was warmly greeted with the song and dance eliciting more laughter from the audience than I had ever seen at a “Birthday Party” celebration. I suppose it was because I was one of the only Canadian teachers, but “I Am a Pizza” had never been performed or heard within the walls of the school before. It quickly topped the charts, and the next day every single one of my colleagues was forced to play “The Pizza Song.”

Incidentally, my popularity among the teachers wavered for a while until the craze passed. But, I remember with fondness the moment I was walking outside of another classroom belonging to Sycamore Class.

What’s not to love about the innocence and humor in children? You can experience the same joy that I did by starting your very own adventure through Oxford Seminars. Is this something you’d like to do? Find out how you can begin your journey here.

Julianna Will has lived, studied, and worked in countries all over the world, including France, Germany, and Greece. After completing her B.A. in Classics, she ran away to teach kindergarten in South Korea for two and a half years, returning to Canada only to continue her studies in Classics. Although she still gets her teaching “fix” as an Ancient Greek and Latin instructor, she often contemplates chucking her PhD and running back to South Korea to spend her days having fun with her kindergartners.

5 ESL Activities for Your First Day of Class

5 Great Props for Your ESL Classroom