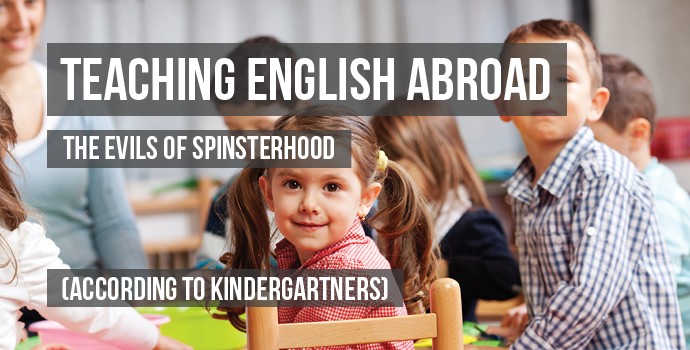 Teaching English Abroad: The Evils of Spinsterhood (According to Kindergartners)

What’s it like teaching English to kindergartners in South Korea? To say there was never a dull moment is an understatement. Here’s a look into my experience:

If any of the little ones finished their assignments early, I usually gave them the option of reading a book or drawing a picture. Early on, they usually decided to read a book, as this meant that they were allowed to go to the library and pick one out (I gave them only two minutes to do this, but it was still exciting to leave class). But as the disconcerting fad of making me, “Miss Julianna,” the star of absolutely everything became almost a mania, reading a book was out of the question. Unless you were reading aloud to fellow classmates, and could therefore insert “Miss Julianna” wherever there was a proper noun, reading quietly to yourself provided no opportunity to talk about me.

I don’t really know how or why the mania started, but it did.

The pictures they drew were always entertaining, and often a bit terrifying. In my previous post, I talked about a visual representation of a “Miss Julianna’s Eyeballs’ Soup” recipe, which depicted me with bleeding eye-sockets and Matthew delightfully spooning an eyeball into his mouth. Andreas would usually draw me as a monster with many limbs and multiple heads, which he would be riding against his fellow classmates. The girls were always, on the surface, a bit kinder, drawing pictures of me as a princess or a movie star. But their comments always came out barbed, with them walking up to me saying, “Miss Julianna, you would be so pretty if you had long hair. See, look.” And I would look at a picture of myself with glorious long blonde hair and feel apologetic for my pixie cut (I had gotten it cut about a month earlier and one of my girls was so upset she started crying). One time, Suzie looked up at me very closely and said, in a voice dripping with betrayal, “Miss Julianna, your eyes are brown. Why aren’t they blue?” I felt like a monster!

Then there was Kevin, my most fanatic fan. His pictures were always very sincere and sweet. They would normally be an accompaniment to made up stories he would tell everyone about how I had gone to the beach with his family that weekend, or how we had (of all things) gone grocery shopping at Lotte Mart where I had bought him a hat. His mum was also a fan of mine, telling me (in Korean) how last year in pre-kindergarten Kevin had cried and protested and sometimes refused to go to school. Now, she would tell me, he would get upset on the weekends because he could not go see Miss Julianna. I was very tempted, I have to admit, to take Kevin back home with me to Canada. He still writes me adorable emails.

My very favorite picture, however, was, of course, drawn by William. William was too smart for his own good. Confident and cocksure, he once told me “Miss Julianna, I want to be a teacher, a president, a lawyer, an artist, and a musician. And I know how I shall be all of them.” William’s English was particularly sophisticated, including the proper use of “shall” when using a first person verb. “I shall be an actor.”

One day, bent over a drawing, he asked me – as they were all wont to do very regularly – “Miss Julianna, are you married?”

The usual response to this was, “Why not?!” spoken in complete shock and horror, as though I had not answered this question about a hundred times before. But today, all William said was, “Okay, okay, okay, okay.” The four consecutive “okays” are a particular Koreanism. He bent back over his drawing and continued.

“Teacher,” said William, “You need to get married before this happens. Don’t worry, I shall find you someone handsome.” Then he thought it over a little longer and said, “I suppose if I don’t find anyone smarter than you when I am a man, we could get married.”

This inevitably drew protests from my aforementioned biggest fan Kevin.

That, my friends, is just a sampling of what you could experience while teaching abroad. Although the brutal honesty of a child can sometimes be an unwelcome dose of reality, the joy that same child can bring makes it all worthwhile. Learn more about how you can have a similar adventure here. Julianna Will has lived, studied, and worked in countries all over the world, including France, Germany, and Greece. After completing her B.A. in Classics, she ran away to teach kindergarten in South Korea for two and a half years, returning to Canada only to continue her studies in Classics. Although she still gets her teaching “fix” as an Ancient Greek and Latin instructor, she often contemplates chucking her PhD and running back to South Korea to spend her days having fun with her kindergartners.