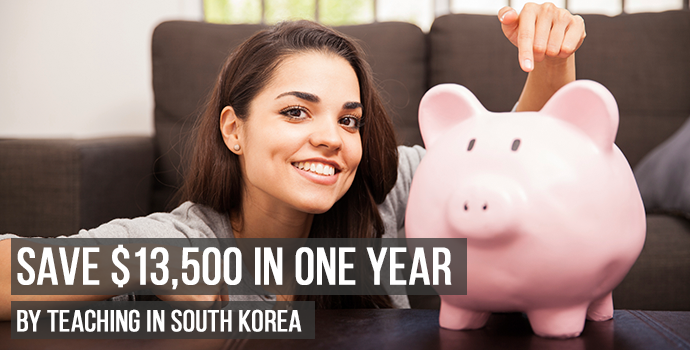 Save $13,500 in One Year by Teaching English in South Korea

Did you know that saving money is one of the big draws to selecting South Korea as a destination for an ESL teacher? Of all the countries using the services of native-English speaking teachers, South Korea provides the most possibilities to earn a lot of money and spend very little. While this is mainly due to the low costs of living, you can still live comfortably in Korea. So, how does this work, and just how much can you expect to save?

Breaking Down the Income

First, let’s look at your potential earnings. Monthly salaries for full-time teaching jobs in Korea typically fall between 2.1-2.3 million won. Let’s use 2.2 million won for a reference point since it is quite a typical middle-of-the-range salary. Along with your wages, your net income should include two more payments:

How about we add it all together?

Moreover, practically all full-time teaching contracts include provided housing as well as reimbursement of airfare expenses to and/or from Korea. Even though these costs aren’t really a portion of your pay, since you don’t have to incur these typical costs, they do add up to another component of saving significant amounts of money.

Unless you take a part-time job or pick a specific employer who pays an hourly rate, your housing in Korea will be included as part of the job offer, and therefore be absolutely free. You’ll still need to pay your utilities, which vary based on your residence. When I was in Seoul, I stayed in a rather pricey apartment building in the downtown area my first year, and my monthly utility bill was about 200,000 won for everything. Let’s use this number for the calculations, but understand that most people can expect to pay considerably less.

Going out to restaurants in South Korea can be extremely affordable, especially if you like Korean cuisine (I adored it!). Common restaurant delicacies range between 3,500 won for a roll of kimbap (Korean sushi) and 5,500 won for a main dish like bulgogi (seasoned beef) and rice. Preparing food at home is even more cost-effective. Food staples such as eggs, rice, and particular meats usually cost less compared to what you would shell out back home. For example, eggs are about 3,500 won (roughly $3USD) for a pack of 12 from the market. In-season fruits and vegetables are found at markets for unbelievably affordable prices. My grocery bill was usually 30,000 won a week. Just in the interest of making a generous estimate, let’s employ 50,000 won as the estimation for one person.

On the contrary, the only way to actually blow your financial budget on food in South Korea would be to eat out too often at Western-style restaurants. But essentially, as long as you keep your Outback Steakhouse visits to a minimum, your total food expenditures (including dining out several times a week) should really be below 300,000 won per month.

One nice thing about having your apartment set up by your employer is that your accommodations will be near the school, and you will not have much of a commute to work. A lot of people, though, may wish to travel to various parts of town several times a week. A half-hour trip on the Seoul Metro (more or less standard from nearly all parts of the city to the downtown core) costs approximately 1,000 won (about $0.90USD). Compare that to New York City’s subway tickets of $2.25 or Tokyo’s 190 yen (about $2USD) for the same journey. Taxi cabs commence from 4,500 won and tend to be about half as costly as in NYC or Tokyo, roughly estimating. I was fairly active and traveled on the subway five-or-so times each week (round trip) and took two or three cabs on the weekends. Added up, this equates to approximately 80,000 won a month on transportation.

These kinds of payments are generally automatically subtracted from your paycheck. In my initial year of teaching, I paid about 50,000 won in taxes, 100,000 won for pension contributions (refunded with employers’ equal contributions when I left the country) and 130,000 won for medical insurance payments monthly.

So How Much Can You Expect to Save?

The monthly expenditures we’ve added up thus far amount to 860,000 won, which subtracted from 2.2 million won results in 1.34 million won of discretionary cash each month. How much of that you decide to spend in vacationing, shopping, going out, etc. is, needless to say, your own responsibility. Nonetheless, it is really not too difficult to save two-thirds of the remaining amount, or approximately 900,000 won from each and every paycheck. Tag on your end-of-contract bonus plus a refund of the net state pension contributions (employer and employee combined), and you should be able to save 15 million won or maybe even more by the end of your year-long contract. At current exchange rates, 15 million won translates into just a bit over $13,500USD. Pretty significant, huh?

Are you looking to for a job choice that allows you to save this kind of money? Let Oxford Seminars help you get started.

How Do I Teach ESL Without Speaking the Students’ Language?