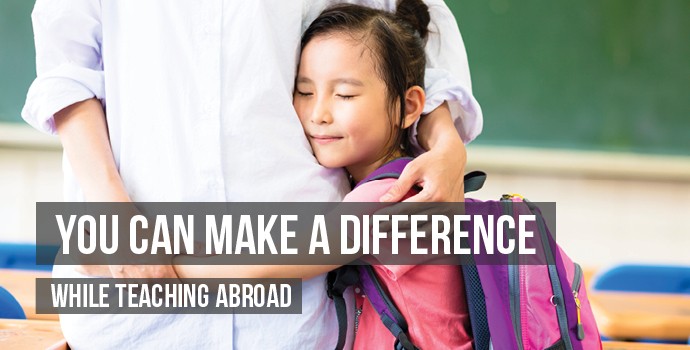 You Can Make A Difference While Teaching Abroad

When you were a child, did you have a teacher that made a difference in your life? Most people have a particular teacher that they looked up to or who served as a valuable mentor. When I started teaching ESL abroad, I never really gave any thought on how I would impact my students’ lives outside of the classroom or the community I lived. It wasn’t until I met a student two years after he had passed through my class, that I started recognizing the difference I was making in the lives of my students.

Making a Difference in the Classroom He was only five years old when I taught him. He lived with his grandparents and saw his mom and dad on the weekends, which is normal in Taiwan. He was shy and very quiet. He had never been to school and cried every day for the first month. At the time, my co-teacher and I were beside ourselves. We didn’t know what to do to help him. Rewards, punishments, distractions – nothing seemed to work. So, eventually I placed his chair beside me and continued with the lessons. For the first few days, he would cry for about an hour. The next week, it was 30 minutes. It continued on like that for a couple of weeks until eventually he walked into class, picked up his chair, and joined the circle his classmates were sitting in.

Two years later as I was walking through the night market, I heard a little boy yelling my name! He was really loud and happy! I turned around just in time to catch him as he threw his arms around me. He looked at me and with all the confidence of a seven year old and told me I was the best teacher in the universe! The term “universe” was obviously one of his new vocabulary words! After he had calmed down, he introduced me to his grandmother who proceeded to thank me. When I asked her why, she told me that every day he cried at school, when she asked if he wanted to go to school the next day, he would reply, “Yes, my teacher likes me even if I’m sad or scared.” She said it gave him the confidence to try new things and that he was currently attending primary school and English school. I cannot describe to you how rewarding it was for me to hear this!

Has a student told you how you’ve impacted their life positively? If so, we’d love to hear your story in the comments or email it to my_story@oxfordseminars.com

The thing is that, as teachers, we can mold how a student looks at learning. For this little boy, just accepting him and letting him work his issues out on his own made an impact on his future learning. A teacher can encourage a student on the path to a bright future, and sometimes show them a path they hadn’t even considered previously.

Making a Difference in the Community

We, as ESL teachers, have the opportunity to not only make a difference in our students’ lives, but to also make a difference in the lives of those in our community. This is why it is important to get involved. Many communities overseas are mono-cultural and don’t get the opportunity to interact with cultures different from their own. They often have some preconceived ideas that they have learned from television or magazines. But, by participating in local events, your neighbors will be able to form a more balanced view. Take, for instance, the Moon Festival in Taiwan. This is a holiday where family, friends and neighbors gather for a BBQ. I had just moved into a new building in Taiwan the month before and didn’t know anyone. I’m naturally a shy person but had enjoyed this holiday previously and decided to go to the courtyard. As I walked around looking at the families and groups of friends, I had no idea what to do. My Chinese really wasn’t that good! Bu,t I sucked it up and walked over to a family that looked friendly, and in my best Chinese, said “Hello, are the sleeps good here?” Yes, the family all looked at me like I was an alien!

I meant to say “dumplings,” but instead, said “sleeps.” These words actually sound very similar in Chinese, and I clearly got confused. Seeing that they didn’t understand, I tried again. This time, I waved when I said hello and pointed to the dumplings as I asked my question. The little seven year old girl was the first to understand what I was saying and explained it to the others. Well, after a very heartfelt laugh, the grandmother repeated the word for me as I tried my best to pronounce it correctly. In the end, I sat down with them, and through a little Chinese, English and miming, we had a great time.

For the next month, all my neighbors made an effort to introduce themselves. They hadn’t before because they didn’t think I wanted to know them. It hadn’t occurred to them that, as an English teacher, I would try to learn their language too. Their opinion was that English was the most important language, and Chinese was simply too hard for foreigners to learn.  However, by attempting to learn it,  I showed them I respected their culture and could be an active member of society.

Within my community, I helped kids study for big English tests, adults practice for interviews, and volunteered at a local orphanage. Ultimately, everything a TESOL does while overseas impacts the community. The choice is yours. Are you going to do it in a positive way, or are you going to feed into the stereotypes that many communities have in regards to ESL teachers? How about changing the perception and making it a positive experience for everyone? To learn more about starting a TESOL journey, check our website.

Alison taught overseas for a just a little over 12 years in Taiwan. During that time, she traveled throughout Asia. On her return to Canada, she began working with Oxford Seminars. As she acclimatized to Canada again, she took joy in watching her dog, a rescue from Taiwan, explore the fall leaves, snowflakes and numerous critters in the parks. She hopes to one day be able to adopt more street dogs from Asia and facilitate adoptions with local families.