﻿ How to teach, travel, & save money on just half a paycheck ﻿ 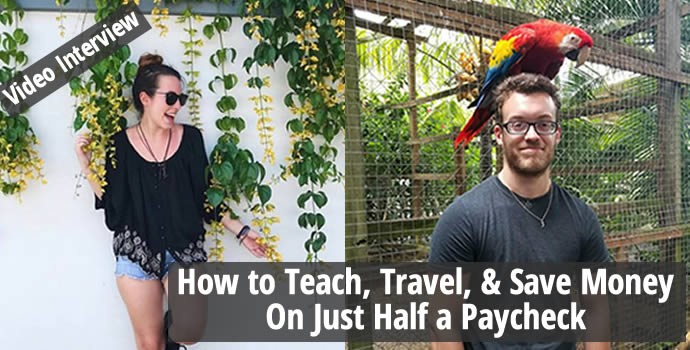 How to teach, travel, & save money on just half a paycheck

Find a Course Near You

Read some of the highlights from the video below:

The last time we talked to you, you were just about to leave for China. How are things going?

S: Really well. It was kind of a whirlwind when we first got here. Everything moved very, very quickly, but we have our apartment, we’re settling into our job finally, and kind of settling into China.

Tell us about yourselves. What made you decide to go on this adventure?

S: I’m from Florida. I’m 23 years old and I just graduated with a degree in Communications from Florida State University. I decided to do this because one of my friends, Emily Smolich decided to do the same thing through Oxford Seminars and she just looked like she was having the time of her life. And it looked like a great way to meet people, travel, and pay off debt. It just seemed like the whole package. And I wasn’t really ready to settle down and stay in one place yet.

C: I’m Colin. I’m 28 and I actually have a degree in Physics. I graduated from UNC. I got really tired of working at a desk. So I started doing freelance work and then Sydney was like “I really want to go teach English in China”… I wanted to get out and see the world and adventure a little bit. Teaching English in China sounded like an adventure.

What is it like teaching English abroad as a couple?

C: It’s interesting because a lot of places have really strong opinions about couples. They’re either very supportive because they get two teachers for one interview process and housing process. Or they really don’t like it because they think we’ll come to their country and then break up and then they’ll lose two teachers. But the people in Changzhou have been really great about it. It really worked out well for us.

C: We’re in Changzhou. It’s about 3.5 hours’ [drive] outside of Shanghai. But the crazy thing about China, even though we’re 3.5 hours out of Shanghai, we didn’t feel like we had left the city the entire time we were driving… that’s how densely populated this part of China is. We’re in…the central eastern [part of China] right off the coast.

S: They told us when we got hired that it’s a smaller city and it’s got a lot of culture. And we’re like “Oh that’s cool! How many people live there” and they’re like “Just over 4 million!”

When did you start teaching? What are your classes like?

C: We got here on a Wednesday. Our schedule with the school is Wednesday through Sunday and then we have Monday and Tuesday off, typically. So we got here, we spent two days getting settled in and I think that Saturday and Sunday we were already in the classroom learning and observing other teachers.

I got kind of thrown into it. Usually they have a two-week training period. I taught my first [class] 8 days after I got here.

S: One of the teachers was sick. [But] they made sure the training periods weren’t super long. They made sure you slowly got accustomed to it rather than just throwing you in the deep end.

S: They’re really, really cute. I have ages 3-12. We each teach 9 to 10 classes a week. They’re adorable… They’re, for the most part, really well behaved. They’re very smart…If I was their age, learning Chinese, I wouldn’t be able to do it, the tests they take and the drilling. It’s a lot of drilling and playing fun games with them.

Now that you’re teaching, how affordable is China?

C: We’re actually getting our first full paycheck at the end of next week. When we got here there was a training period like we mentioned, and that’s not paid at the full salary rate. So we basically got a little under half a month’s pay in April.

S: Which is really ironic because we got a little more than a third of a month’s pay but we were still able to go to Thailand and live comfortably, pay all our bills, and send money back to family. So this will be our first month with a full paycheck.

C: The school is pretty flexible during the week. They’re pretty flexible about letting us request [time] off. Even though we’ve only been here 7 weeks, they let us have a three-day weekend.

Have you done any traveling since arriving in China?

S: We left school on a Sunday night…got on a plane… and we landed in Thailand. So the USD… is worth about 31 in the Thai baht and we lived like Kings on no money at all! [The flight] was about 4 hours.

The hotel we stayed at was a 5 star hotel and it was so cheap! It was breathtaking. And everyone in Thailand, literally Bangkok is known as the city of smiles, they are just the nicest people you’ve ever met. And the weather was gorgeous and there were temples everywhere!

C: And you can haggle for everything! And I like haggling so I got some pretty good deals!

S: Thailand is my number one travel location! I just want to go back.

C: We’re already planning a second trip. We have a much longer vacation from the school later in the summer, and we already know that’s where we’re going.

S: Yeah that’s the great thing. China has so many holidays.

Where are you planning to travel next?

S: We’ll be taking a trip to Hong Kong in the next couple months and then Thailand, but a different part of Thailand, not Bangkok, probably Phuket.

Have you made friends with other teachers abroad?

S: Yeah, our school employs like 30 teachers and they just opened a new location so they’re growing. It’s a whole bunch of Americans and Canadians.

C: I’ve met a handful [of friends] who are either going to university or teaching at other schools by playing soccer. I’m in a chat group that has about 25 other foreigners in our city that get together to play soccer once a week.

Do you have any last words of advice for people thinking about teaching English abroad?

S: Just do it. It’s very scary and there can be a lot of paperwork to go through but it’s totally worth it. I’d do it again in a heartbeat.

C: Yeah, if you’re at this point watching this video, chances are you’re really curious. Just go for it!

Teaching ESL abroad is a great way to save money on travel!

Love Is in the Air – The Teaching Abroad Pod (Episode 1)