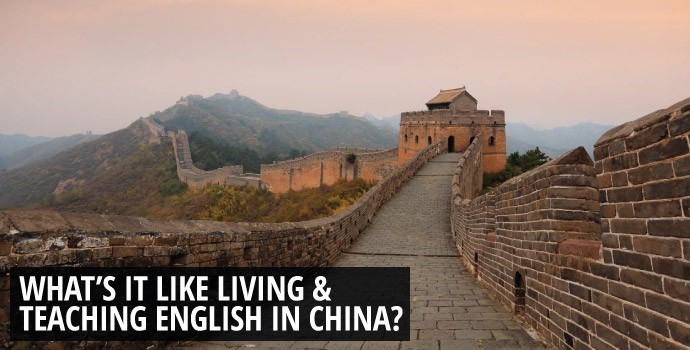 Teaching English in China gives you the opportunity to save money and gain valuable work experience while exploring 6000 years of Chinese culture in a way few others can. Whether you’re exploring the Great Wall, sipping green tea, or shopping in Shanghai you will experience stories to last a lifetime. Here you will learn what it’s like living in China, one of the world’s largest ESL markets, from housing, to transportation, to food, etiquette, and culture.

China is one of the largest countries in the world by area, and is the most populous. Its history dates back over 6,000 years. The yin of Imperial structures, calligraphy, Tai Chi, the Great Wall, and green tea is balanced by the yang of bright, bustling cities and the production of much of the world’s electronics. China has a lot of great sites to offer, explore the Forbidden City, landscapes like the Three Gorges of the Yangtze River, or the volcanic dishes of Sichuan. China is a leader in international technology industries such as computer technology, space travel, and information technology. Juxtaposed to this is the fact that the Chinese government is a strong opponent of free speech on the Internet and other media. It may be hard to access popular websites like Wikipedia, BBC, the New York Times, as well as social media like YouTube or Facebook.

Enjoying modern technologies such as high-speed Internet, cable television, and cell phones will not be an issue in urban China, yet could be problematic in rural areas.

Most English teaching jobs in China will include an apartment. Apartment costs vary depending on the school and location. Contracts that do not include housing may compensate with higher salaries. This information is usually included in the job posting, but be sure to clarify these details after receiving a job offer to ensure that this is fully addressed in the contract.

A teacher’s apartment is typically located on or near a campus, and often shared with a roommate. For the most part, English teachers will find western amenities such as a bed, table set, tv, refrigerator, desk, laundry facilities, and toilet. Beautiful gardens in a rural area of China

Most schools provide an allowance for partial flight costs; however, teachers often must pay the initial cost. The school will then reimburse them or provide a bonus at the end of the contract. You should keep any of your airfare receipts in case they are required for this benefit.

Medicine is an interesting and important element in Chinese history. The Chinese have always used a combination of herbal and food remedies as well as massage, acupuncture, and preventative care to treat many ailments and injuries. Today, medicine in China is a hybrid between the traditional Chinese practices and modern medicine imported from the western world.

Much of the healthcare system’s resources are devoted to large urban areas such as Beijing, Xi’an and Shanghai. Getting professional medical attention when living in a rural area or small city can be slightly more challenging.

The amount of healthcare coverage an English teacher receives varies between schools. If there is any confusion about medical coverage after reading a contract, be sure to ask the school to specify this information. In most cases, it is highly recommended to couple the school’s benefit plan with private health insurance to cover any medical, dental, or prescription costs.

Retirement age is a constant source of debate in China. Currently, women working for the government or a state-run company must retire at 55 years of age, while men can retire at 60. Women working a blue-collar job must retire at 50; while men can work an extra five years. As a result, older ESL teachers may experience a more difficult job search than a younger teacher would. However, the situation can vary across the nation with rural areas seeing less stringent restrictions than major urban areas. Trains are a popular mode of transportation in China

Many people find taxis safe and convenient. Most cities, towns, and even villages have a taxi service. however, there are very few taxi drivers that know how to speak English. It is recommended that teachers carry a business card with their work and home address in Chinese, or have a local write down their destination.

With concerns over air pollution, China is encouraging the use of public transportation. Most urban areas have subway systems. The train is one of the cheapest ways to travel across China and to other countries. There are four ticket options:

Like the train, the bus is an inexpensive way to travel within the city or across China. Buses travel to many remote locations and smaller towns inaccessible by train and tend to fill up more slowly, making it much easier to get a bus ticket and to find a seat.

The bicycle is the most popular form of transportation in China. The streets and roadways are loaded with cyclists making their way to work, shopping, or just out for a leisurely ride. During peak hours there are often crowds of cyclists.

If time is an issue and money is not a concern, traveling by plane is a fast and comfortable alternative to land travel. Most areas of China are accessible by plane. Many airports are small and only offer domestic flights, but some do offer international flights as well.

In recent years, automobiles have become more popular and accessible for many in China. In addition to purchasing more cars, the Chinese are also buying motorcycles and scooters.

Getting a Chinese Driver’s License

There is no set protocol in place for converting an American driver’s license into a Chinese one. However, for around 300CNY (around $45USD), you can take the driver’s test. If understanding the Chinese language is a concern, bring someone to translate for you. Remember to bring your passport, your current driver’s license, and a cash payment.

Before taking the exam, applicants will need to fill out an application form and have a basic eye exam. Teachers can take the test in one of nine languages, including English. A score of 90 percent or better is a pass. If the test is passed, a Chinese driver’s license will arrive within a couple of weeks. If the test is failed, a rewrite is included with the fee as long as it is taken within ten days of the original test.

Etiquette Tips for Teachers in China

Proper etiquette is very important in Chinese culture. Below are some of the prominent customs, which may vary by region.

A Trip for Your Taste Buds: Eating in China Chinese cuisine is one of the most popular foreign foods worldwide, but much of the food is simply an Americanized adaptation. Chinese food can be separated into eight regional categories which each have their own style, ingredients, and flavor.

Some of China’s more popular dishes include:

China’s climate varies greatly depending on the region, ranging from deserts, to fertile grasslands, to snow-capped mountains. Northern China has hot summers and frigid winters, while the central area is more temperate, and the south has very hot summers and warm winters. Be sure to research the weather in the region of any offered position. See the list below for cities and climate zones: Our Job Placement Service Helps You Find a Job

Available exclusively to Oxford Seminars TESOL/TESL/TEFL Certification graduates at no additional cost, our Job Placement Service provides assistance with finding teaching jobs at ESL schools in China and around the world. We have formed partnerships with language schools worldwide that are searching for certified ESL teachers. Our Job Placement Advisors provide timely job placement assistance to help make your experiences abroad as rewarding as possible.

Discover what it’s like to live and teach English in China by attending a free information session near you, or download our free course guide!

How to teach, travel, & save money on just half a paycheck