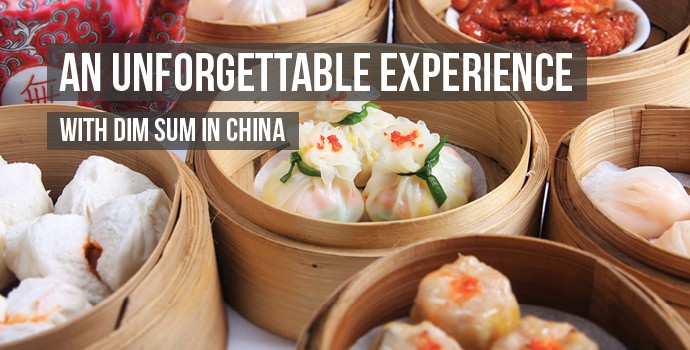 I stared down at my plate. My brain argued with itself while I struggled not to gag:

Let’s put this inner conversation on hold for a minute while I catch you up on the context. I was in China for business and my new friends and I were hungry after taking the day off to explore. As a result, we all decided on dim sum. Variations of dim sum in China

Dim sum is Chinese cuisine, served in small portion sizes and usually cooked in a bamboo or steel steamer. There are endless types of dishes one can order, which is why it’s best to go with a group of people so you can taste a variety of different flavors. For me, it was all about the dumplings.

I’d had this type of meal several times since arriving in China, including a type of bao (cha siu bao) I recognized from a previous experience with a street vendor in San Francisco. The sweet bread, hot from the steamer, came apart easily to reveal the pulled pork goodness inside that melted in my mouth. Here in China, the baos were smaller, and I’d not had the same filling twice. But, let’s go back to my brain battle at the crowded table I shared with three others. We groaned from the weight of the number of bamboo steamers covering every spare inch in front of us. I reached for seconds of a particular bao that seemed more like dessert with a sweet, crunchy topping, this time a cha siu bao that was baked rather than steamed. So many new dishes of food to try in just one meal setting! Besides the sugary bao, I’d discovered a delightful little bell-shaped dumpling filled halfway with broth, called Xiaolongbao! I’d also tried what looked like a cross between a shrimp rangoon and a sushi roll, called siu mai. It was so delicious!

The food kept coming, as did the bottomless tea pot in front of me. My three other companions kept ordering food in Chinese, stopping to ask what I liked and telling me things I should try. There were some items I was clearly going to avoid, such as the pig intestines one of my friends seemed to be thoroughly enjoying.

I noticed, too, that very little of the animal is wasted with Chinese cuisine. That tasty beef round I’d just sampled had seemed to be just as much fat and bone as it was meat. Upon eyeing the dish of chicken feet sitting in front of me, mocking me in my cowardice, my assumption on the lack of waste was confirmed. For the record, when I make fresh homemade chicken soup, I follow an old Jewish recipe that says to add chicken feet to the simmering stock, which I gleefully enjoy. What I don’t mention to people is how queasy I get at the sight of the toenails separating from the feet as the stock cooks. And here I have feet on my plate. The toenails were conveniently gone, and the feet were waiting to be eaten.

I tried, I really did. I watched the others around me eat the chicken feet. I saw a toe disappearing into their mouths, similar to a corn dog on a stick.

My friends were busy with their own food – I assume to let me have my small breakdown in private. Watching them eat the delicacy, I decided I could do it, too. I took a deep breath and used the chop sticks to bring a foot to my mouth. I nibbled on the skin (away from the missing toenail, mind you).

“It tastes like ginger,” I said to the table in general. I guess I thought if I talked about it in terms of spices, I could pretend I wasn’t eating a chicken cadaver.

One of my companions shook her head. “No. No ginger on it,” she answered as she put another toe into her mouth.

I braced myself for another leathery nibble, but I couldn’t do it. As politely as I could, I shoved the remainder of the chicken foot on a different plate and shuddered in relief to get it away from me. I pretended that I hadn’t broken out into a sweat as the others at the table laughed at me.

I had to admit defeat. But next time, we’ll see if I’m ready to step up to the plate.

Although you might not like the idea of branching out of your preferred cuisine, experiences like this are part of the adventures of teaching English abroad. They make for great laughs, memories, and who knows, maybe even an expanded palate!

Discover what it’s like to live and teach ESL in China by attending a free information session near you, or download our free course guide!

Have you ever eaten chicken feet? What did you think? What was the strangest thing you’ve ever eaten while teaching abroad?

Ready to start your adventure teaching English in China, and many other great ESL teaching destinations?

Tammy has been traveling abroad experiencing different cultures for more than 10 years. Her travels include Japan, China and South Korea. She says she travels so she can taste the different cuisines. Her ultimate goal is to eat her way through Italy.

How Much Money Can I Make Teaching English in China?