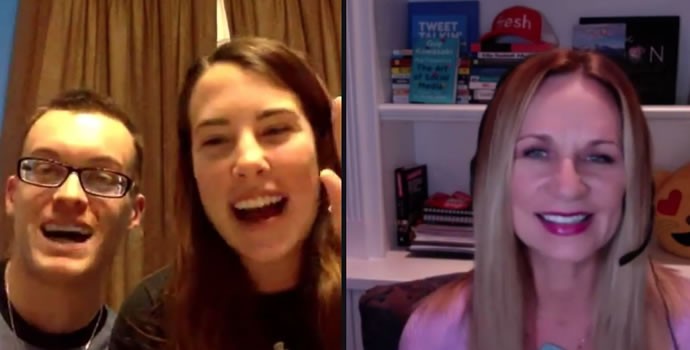 See how this couple prepared to teach English in China – Video

Oxford Seminars Grads Sydney and Colin are preparing to travel abroad and teach English in China! In this video, they talk about their TESOL course, finding a job teaching English abroad, and preparing for their adventure overseas.

Find a Course Near You

Read Some of the highlights from Sydney and Colin’s video below:

Where are you going to teach English abroad?

Colin: We’re going to a town called Changzhou in China, it’s about three hours northwest of Shanghai so it’s close to the westernized big metropolises of China but it’s also far enough away that it has that authentic Chinese feel to it.

When did you decide you wanted to teach English abroad?

Sydney: I decided before I even graduated [from university]. One of my best friends had been doing it and she loved it. And I was like “Ok! I just really want to do this!” I met Colin and I was like “Yay! We can date but I’m going to another country in like a year or two so if you want to come, you’re more than welcome!” and he was like “I’m down! Let’s explore and adventure!”

And I love kids and I love teaching so this just seems like a perfect fit.

Colin: We had definitely made up our minds more than a year ago today, and it wasn’t even like we were just talking about it. We were for sure doing this.

Sydney: Then we went to a free information session, which was actually incredibly helpful… It’s absolutely worth it. We learned so much information in like an hour or two hours. It was so helpful. It cemented our decision. We were both like “this sounds great! We want to do it.”

What was the instructor at the information session like?

Sydney: She was magnificent!

Colin: She taught abroad and she was currently teaching at a domestic location, Miami I want to say. But she did it for 10 years, she taught abroad. So she knew pretty much any answer to any question you could think of.

What were some of the things they went over in the information session?

And then she opened it up for questions and I think we talked for another hour just asking questions, anything that anyone could think of.

Sydney: One of the things that she said that just stuck with me this entire time was: a whole bunch of people were really nervous and tentative about doing it because it’s [teaching English abroad is] such a big thing and she was like “my last class I taught, there was a woman in her 70’s who did it and she’s in Thailand right now… having the time of her life. If she can do it, any of you can do it.”

What happened after the Information Session?

Sydney: We signed up! The class was three weeks long, just on the weekends, 9am to 6pm Saturday, Sunday…and then you do the online course work.

Colin: And you have 90 days to do that by the way. [Oxford Seminars actually allows students 105 days from the final day of the in-class course to complete the Online Component]

Sydney: And our class was spectacular! We became so close with all the people we were learning with. Our teacher was really great. We all have a Facebook messenger still where we’re like “where are you going [to teach English abroad]?”

What was your favorite part of the course?

Sydney: Mine was when we got to class, I think I had two, the teacher would always do really simple warm ups with us and it’s really funny because it teaches you the warm up for when you teach but they’re mostly geared for people who don’t speak English. So you know our class all spoke English, so we would take them and just run wild with them, like acting skits and fun games and our class just became such a family.

I really liked that we started bringing food for each other from different cultures around the world and different breakfasts and different coffee. I don’t know. I just loved that whole part.

You have to do a practicum at the end where you actually teach the class a lesson and that’s your pass or fail… and right around then was when we all started getting really stressed out and a little worried so we all started bonding more.

What was the age range of students in your class? Was it all millennials?

Colin: Well you have to be at least 18 in order to take the class, but a lot of countries require a degree, so I think that kind of shaped the class that we were in. At the information session there was at least one person who was a recent high school graduate, but as far as the actual class went, everybody had at least graduated from college.

Sydney: Yeah, but there were tons of different age groups.

Colin: I think there were two people who were over 50. We had the whole range [of ages taking the course].

Sydney: We had someone…who just emigrated from another country. English wasn’t even his first language. We had someone who was an award winning producer. We had just like everything you could possibly imagine in the class. Every age, every shape, every size… everyone. It was so cool.

And that’s the great thing about this is that it fits all those criteria. And for us, we wanted to teach and we wanted to travel, but we also want to be able to save money. And teaching here in the US isn’t something that’s going to save you or make you a lot of money. But you can go elsewhere in the world and still be able to impact lives in that way and you can also be paying down your bills and your debts and stuff.

Colin: Yeah it’s huge. It’s a great feeling to know that you’ve got all your bases covered.

How long did it take to start interviewing after you graduated?

Sydney: The longest thing, which ironically only took 30 minutes, was going online to the Oxford Seminars website and they have this whole resume builder for you.

And we’d been kind of putting it off because it’s so annoying to type out your resume like 800 times, and one day I was just messing around and I went on and it took like 10 minutes! The Oxford Seminars portal set up everything for me!…and then it’s like “what countries do you want to go to?” I was like “Oh I’m doing this now!” and it was like “Your resume has been sent to your advisor.” It was so fast!

Colin: We pretty much completed it on accident. It was that quick.

Sydney: We literally sent it out and our advisor messaged us back with all our resume edits. He goes through your whole thing for you, you fix it, you send it back to him. This all happened in like a day. He messaged us back saying “Okay, I sent out your resumes. You should hear back soon.”

We’re like “Okay, like 3 weeks, 2 weeks or something.” The next day we woke up to four Chinese emails [requesting interviews]… We had to have this huge planner because everyone answered back! We had Thailand, South Korea, and China all within a week!

Colin: [Thailand] was one of the places where [the school we interviewed with] couldn’t guarantee we would be working in the same school. And not everybody said that we could, but they were all very upfront about whether or not we’d be able to. So we could very quickly determine if a school was the right fit for us because they would say “Oh well maybe you could be in the same town.” [The school] in Thailand was like “you could be in the same region.” We weren’t really interested in that.

Did you pick China right away or keep an open mind?

Sydney: Oh yeah! In the Oxford Seminars module you can pick 5 countries that you want to go to and I literally had to message him [my advisor] separately and say “I’ll go anywhere!…Can you send my resume out to more than 5?” and he was like ” yeah I can send them out to a few more.”

We were completely open. We were going to interview with everyone.

Do you know what type of class you will be teaching?

Sydney: We do! We hit the weirdest combination of things. Saturday and Sunday, 9am to 5pm we’re teaching high schoolers… Monday and Tuesday we have all days off. Wednesday, Thursday, Friday, we’re teaching Kindergarten for an hour or two a day.

Are there going to be any other Americans teaching with you?

Sydney: There are. That was another thing we really liked about that school…. We got to [talk to] the head English teacher, who came [to China] from America. So he got on Skype with us and he talked to us about how they all get together and have dumpling parties…and play football. It seems like a great community.

Do you have any plans to travel when you are teaching in China?

Sydney: I really want to go to Thailand. And the plane tickets [for flights within Asia] are so much cheaper.

Colin: I want to say it’s like a 4-hour flight [from China to Thailand]. And once you get over there, she’s totally right. It’s way less expensive to travel between countries.