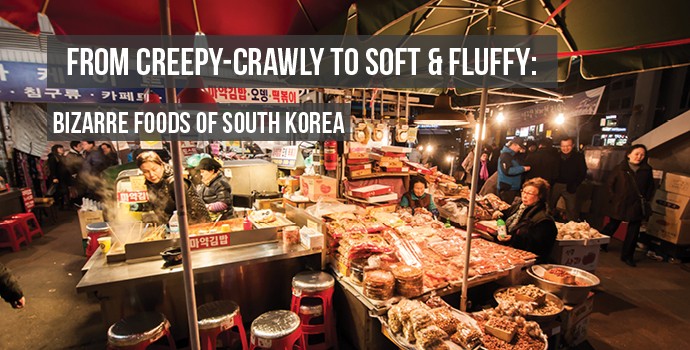 From Creepy-Crawly to Soft & Fluffy: Bizarre Foods of South Korea

When I packed my bags and moved across the ocean to accept a job teaching English in South Korea, I knew I would be facing a lot of experiences I hadn’t yet dreamed of. I expected the culture shock; I expected the language shock; I even expected to take some time getting used to the food. What I didn’t quite expect, was just how terrifyingly fascinating some of those meals would be.

Experiencing the Cuisine in South Korea

The two years I spent teaching English in South Korea gave me the opportunity to experience a culture rich with history and traditions. If you’ve ever watched Andrew Zimmern travel the world downing bugs, spiders and slippery, slimy animal parts on his Bizarre Foods series on the Travel Channel, you might have an idea of the types of things I found myself facing at the dinner table. From creepy and crawly, to cute and fluffy, South Korea has a variety of cuisines that rival China for ‘most bizarre.’

One of the many benefits of living and working in a country, rather than visiting as a tourist, is the opportunity to dig deep into the culture. The time I spent teaching English gave me the chance to see and sample many things Americans have a hard time understanding. Luckily, when it comes to food, it’s usually easy to understand what’s being served.

Unlike the wide variety of foods served up in the typical American restaurants, Korean restaurants often tend to specialize in a few specific items. This leads to some rather amusing signage displaying the specialty, say pork, as a smiling happy pig, but it makes it a lot easier to understand what’s being served in a particular restaurant.

The first food most Westerners associate with Korea is dog, a meat known to the locals as “Gaegogi.”  I apologize to all the dog lovers, but it’s true that dog is still considered a specialty in Korea–albeit one that is declining in popularity. According to the BBC, Koreans eat approximately 8,500 tons of dog meat each year, most of which is served roasted or in soups and stews.

The most popular of these dishes is called Bosintang. This stew made with dog meat is known for its ‘invigorating’ effect and is popular with men who believe it strengthens the body and increases stamina. Dog meat is also commonly mixed with medicinal herbs like ginger and chestnut to create a health tonic called Gaesoju. Also known as Urechis unicinctu, the fat innkeeper worm, or the penis fish. It is a species of spoon worm.  (Photo courtesy Ryan Bodenstein on Flickr)

Another visually challenging food you could encounter in Korea is Gaebul, or Spoon Worms.  Looking like a cross between a water filled child’s toy and a certain part of the male anatomy, Gaebul can sometimes be seen floating in tanks in Korean restaurants.  The most striking thing about Gaebul is that in South Korea, it’s generally eaten raw with salt and sesame oil.  That means a plate of squirming live fillets slithering around a plate isn’t an uncommon site in Korean restaurants. Similarly, Korean men are fond of eating live octopus, polished off by dipping it in oil so that the suction pads don’t stick on the way down.

If your stomach is still intact at this point in the story, there’s one more extreme food Korea has to offer the highly adventurous; Bondegi. Of all the foods I’ve mentioned so far, Beondegi was the only one I was brave enough to actually try. Beondegi are stir-fried, boiled or roasted silk worm pupae that are seasoned and sold as a snack by street vendors and in restaurants. I wanted to like Beondegi; to be the one Westerner at my school who could stomach them. In my quest not to be viewed as the uncultured American, I decided to try some while I was out with some Korean co-workers.

The first barrier to my culinary challenge was simply getting near the stuff. It has a fairly powerful….smell about it. In fact, you can smell it from at least 3 yards away. Getting closer simply means you can see what it looks like as well – and trust me, the visuals didn’t do much toward increasing my appetite. While Koreans pop them into their mouths the same way we might snack on trail mix, the crunchy, yet mushy texture left me desperately trying not to show my disgust. This is one struggle you don’t want to take on if you are desperately trying NOT to offend your hosts.

My attempt to enjoy Beondegi was enough to cause me to abandon all hope of ever trying more unusual Korean foods, but it’s an experience I’m glad I allowed myself to have. Adjusting to Korean food wasn’t really all that different from adjusting to any other part of the culture. There are things you will enjoy and things that will be far outside your comfort zone.

When it comes to the food, keep in mind that you’re never obligated to eat anything that makes you uncomfortable, but leaving your mind open can be a great way to have an interesting experience.

For more information about teaching and living in Korea, take a look at our Expat’s Guide to Teaching ESL in Korea.