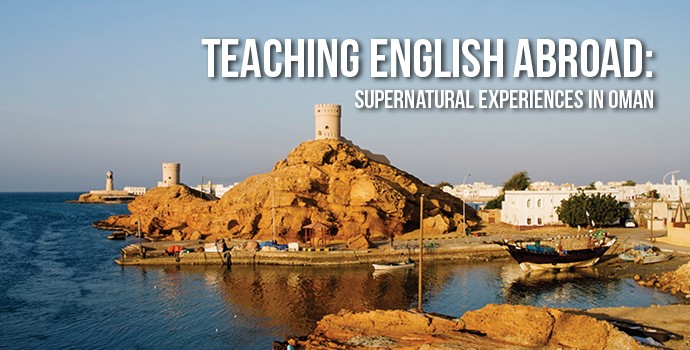 It was Saturday, the first day of the school/work week in Oman. Younis, one of my students, came in looking noticeably tan. Of course, Oman is the land of 363-days-of-sunshine-per-year and many Omanis have tan faces, but Younis was usually quite pale. On this Saturday morning, he looked as though he had spent a solid week at the beach.

“Have you been spending a lot of time in the sun?” I asked him after class. Expecting him to describe a day of playing football (soccer) with his friends or something similar, I was surprised when his expression became very serious.

“My grandmother did this to me,” he said. “She changed the color of my skin.” I must have looked puzzled.

“Your grandmother?” I asked. Younis went on to explain that his grandmother had special powers, a connection to the unseen world and to malevolent forces, which could cause strange things to happen. She was like some of the people of Bahla, a town near the ancient Omani capital of Nizwa, known for its many practitioners of what most Westerners could call “black magic.” For some reason, Younis’ grandmother did not love his family and had wished considerable damage on them, even causing his older brother to stop talking for years. Younis seemed resigned to his new skin tone, understanding there was nothing he could do about it except what good Muslims do—pray, read the Qur’an and possibly consult a sheik, a person granted authority in a community for his or her special closeness to God and in-depth knowledge of the Qur’an. In other words, someone who could give him advice.

Younis also told me that his grandmother communicated with djinn (singular: djinni, an Arabic loanword in English, which we spell genie). Djinn are invisible beings created by God who can be either good Muslims or troublemakers, who can travel long distances instantaneously and who tend to congregate in dirty places, such as garbage areas, bathrooms and such. Djinn, according to traditional Omani belief, can be communicated with by certain people and even possess humans. During one of my grammar classes the previous year, a student named Yousef suddenly blurted out something I did not understand. The other students in the class explained that what he had said did not make sense and was the result of possession by djinn.

“You mean there is a djinni inside his body?” I asked. I looked over at Yousef and his eyes rolled back in his head. Otherwise he seemed okay, but it was obvious I would have to postpone my grammar lesson for a bit.

“Yes, he has djinn, maybe one or two,” a student said.

“Can he make them come out?” I asked. The students explained that Yousef could go to a sheik who would chant the Qur’an over him, thus encouraging the troublesome djinn to go on their way. Suddenly Yousef stood up.

“Cut!” he said, as he made a slashing motion with his hand across his stomach. The other students laughed. Cutting one’s body with a razor, they explained, was a traditional way to provide an opening from which the djinn could leave. At this point, my grammar lesson suddenly seemed rather insignificant. Resignedly, I explained that I needed to continue to teach since class time was running short and there would be a test on the material. The students agreed, and actually seemed strangely unperturbed by Yousef’s possession, as though it were just a normal and inescapable part of life.

What was normal to this Omani class was anything but normal to me, which is further confirmation of varying cultures. Perhaps one of the most difficult transitions many ESL teachers will face is adapting to nuances and happenings that seem absolutely extraordinary to the teacher, but completely ordinary to the students. Being prepared for radically different cultures and being open to respecting the varied beliefs that exist around the world can help pave the way for some of the most fascinating experiences you can have teaching English abroad.

For more information on teaching English in Oman, check out our Oman information page. To learn more about your options as a TESOL certified educator, sign up for one of our free information seminars in the city nearest you.