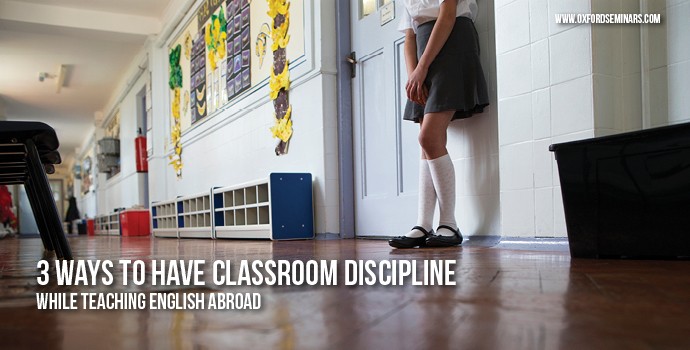 3 Ways to Have Classroom Discipline While Teaching English Abroad

Classroom discipline is a tricky topic, whether we are talking about your own children or those under your care. Add in a cultural and very often linguistic barrier that TESOLs must face, and the whole thing can get really messy. But, I must say this first and foremost: if you find yourself in a position where you are constantly having to discipline your students, you need to re-evaluate what you are doing in the classroom. In a well-run classroom, discipline should be infrequent and only used as a last resort.

There will be times, however, where discipline is necessary, and it will be equally necessary to make certain that you are being sensitive to the cultural, and even legal conditions, under which you are working. These are, of course, going to vary from country to country. But, for those of you teaching in South Korea, here is a list of some of the more important things to keep in mind:

So, what can you do?

Confidence is, of course, the most important skill you can learn for keeping a classroom disciplined. Unfortunately, it is something that needs to be learned, and chances are that you are not going to be Professor McGonagall in your first few months of teaching. Confidence in teaching comes with experience.

The “English Only” Rule

My ultimate secret to taming an otherwise wild classroom in my early ESL teaching career was enforcing the “English Only” rule. You may find yourself working somewhere where this mandate has already been established, in which case you are lucky. If, like me, you find yourself in a school where this is not the norm, I strongly encourage you to enforce it – regardless of students’ language ability. There are a number of reasons why this rule is important, especially if you, the teacher, are not yet familiar with your students’ native language. First and foremost, if students are speaking out in a language you cannot understand, you do not have control of your classroom – your students do. “English Only” also means they are far less likely to speak out of turn in class. Everyone will be a part of the conversation, and everyone will be thinking before they speak. When I finally managed to enforce the rule, my classroom transformed from unrestrained chaos into beautiful order.

Implementing the rule, however, can be tricky. You need to enforce it from day one. My system was to write the name of any student who broke the rule on the board (not in red!).  If the rule was broken less than three times in a class, the class would receive a point for the day. Once they had thirty points, I brought in a prize (usually candy for large classes, though I did once have a class of four who requested pizza!).

Surprisingly, the students really enjoyed the system. Their favorite activity was trying to get me to say something in another language. If they succeeded (Teacher, what is the German word for horse?), I would diligently write my own name on the board. If they caught me three times, I gave the class an extra point. Sometimes, if the students were really getting out of hand speaking Korean, I would also start conducting my lesson in another language. This would almost always stun them into silence. But if you are not bilingual, the name on the board usually was sufficient for making them follow the rule. If the day’s point was not won, it was very clear to the students who was to blame.

And for the record, no one wants to be the reason his friends do not get candy.

You may find that these tactics do not conform to your teaching style. If so, don’t be afraid to try something of your own. Just remember: you are the adult in these situations. Don’t get angry, don’t take it personally, and don’t hold grudges. These kids are generally on their eighth or ninth hour of school by the time they get to you, so they deserve some understanding when they want to get up and stretch their legs.

Hear many more stories and experiences from teachers of English abroad here. Julianna has lived, studied, and worked in countries all over the world, including France, Germany, and Greece. After completing her B.A. in Classics, she ran away to teach kindergarten in South Korea for two and a half years, returning to Canada only to continue her studies in Classics. Although she still gets her teaching “fix” as an Ancient Greek and Latin instructor, she often contemplates chucking her PhD and running back to South Korea to spend her days having fun with her kindergartners.