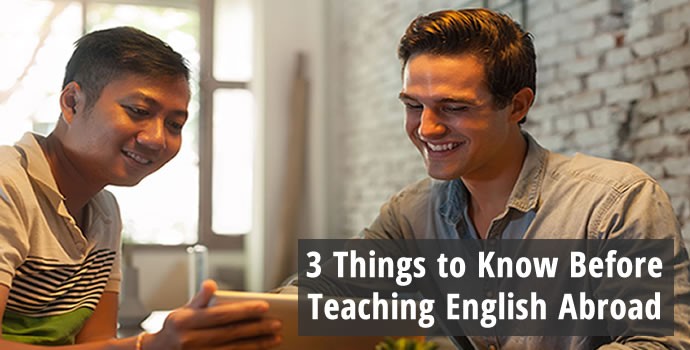 Teaching English Abroad is an exciting and life-changing experience. It gives you the opportunity to travel, make new friends, and earn money while exploring an entirely new culture and way of life. But it can be a daunting and nerve-wracking experience as well. Many new and first-time teachers worry about what it will be like living in another country, especially one where English is not a commonly spoken language. With that in mind, read below for answers to three of the most common frequently asked questions new teachers ask about learning the local language, living abroad, and meeting other English teachers in a new country.

How much of the local language do I have to learn?

It is always useful to know some of the language, at least when you are shopping or trying to order food at a restaurant, but you don’t need much for your English lessons because either 1) many schools and colleges prefer English immersion in the classroom–for students to hear nothing but the English language or 2) in some cases you will have a co-teacher who will translate what you say. Generally strategies such as speaking a bit slowly, using gestures and pictures, and minimizing idiomatic language will be all you need.

It is best to learn at least some of the local language so that the responsibility of deciphering speech need not fall solely to the people whose country we are lucky enough to be visiting. The locals are usually thrilled when visitors at least try to use their language and in such instances it places them, rather than ourselves, in the position of language expert. Yet it is also true that many people want to practice their English with foreigners, so speaking mostly English is still not a problem. Regrettably, I have usually learned very little of local languages beyond hello, thank you, goodbye, and some key phrases due to my poor memory. I certainly do not have the linguistic gifts many people have but I have also become very skilled at using pantomime, pictures and very simple English to get my messages across. (I often joke that I could have been a professional mime.)

In addition to learning at least some essential words and phrases, I would advise newly arrived English teachers also to learn about the local language so they can understand some of the mistakes their students make as a result of first language transfer. Thai houses on the water

Where will I live?

In many cases the institute or recruiting company that hires you pays for your accommodations, leaving you only the responsibility of paying the monthly utilities. Apartments are often sparsely but adequately furnished with a bed, a table and chairs, a wardrobe, and possibly another chair or desk. Sometimes in lieu of an apartment you receive a housing allowance that more than covers the cost of rent and utilities. If this is the case, you can then choose the location and size of your apartment, but it also falls to you to locate one to rent in the first place. Your company would in that case put you up in an inexpensive hotel for a week while you contact other teachers at the school who can help you, such as by putting you in touch with the owners of apartment buildings.

Your contract will stipulate the arrangements for accommodations and may require you to share a two-bedroom apartment with another teacher.

I have taught in five countries in Asia and the Middle East and only in Thailand was I not supplied with paid-for housing. But most of the Thai teachers lived in traditional Thai houses on the campus perimeter, and since the house offered to me rented for only $50 a month, I agreed to live in it and enjoyed it immensely except when I occasionally found a snake in my bathroom. A view of the Shanghai skyline

In China my contract promised me my own one-bedroom apartment but the college put me up in a hotel upon my arrival, promising me the apartment in three weeks when construction would be complete. Four months later I was still in the hotel. Being unable to cook for myself for four months was difficult but I could always get breakfast and often lunch and dinner in the hotel dining room and a staff member delivered hot water to my room every day for tea.

What countries will most of my colleagues be from?

In addition to local teachers, you will likely work with teachers from English-speaking countries such as the UK, Australia, Canada, the U.S., New Zealand and South Africa. At the college where I taught in Oman there were teachers from fifteen different countries, including Sudan, Georgia, Trinidad, Sri Lanka, Jordan, and Zimbabwe. Variety among the faculty is one of the highlights of teaching overseas because in addition to learning about your host country, you get to learn about your colleagues’ countries. From Australians I learned what it’s like to have Christmas in the summertime and from South Africans I learned about Afrikaans, a Dutch-based language many of them grow up speaking in addition to English. From Canadians I shamefully learned that they know much more about the U.S. than most of us Americans know about Canada. Perhaps most surprising of all, I learned that the word “English” should really be plural, as in “Englishes,” and that my American vocabulary was not always up to the task of understanding what my other English-speaking colleagues were saying.

Want to learn more about Teaching English abroad, possible salaries, and where the jobs are? Speak with one of our experienced instructors at a free Information Session, or download our Course Guide.

Finding My Apartment in China While Teaching ESL

5 Questions to Help You Save Money While Teaching English Abroad