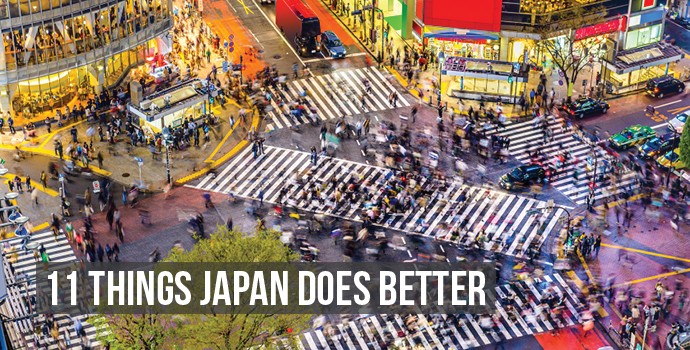 Although you can trace Japan’s ancient roots back thousands of years, today’s culture is quite different from those early days. From the delicious, fresh foods to the heated seats, they have had time to perfect things over the years. Here is a list of the things Japan does better (and maybe that Westerners should imitate): This very well could have been a living example of the saying, “Necessity is the mother of invention.” Houses in Japan tend to be poorly insulated, and because of the astronomical cost to heat a house, it is typical to only heat certain areas of a home. While the bathroom may be one of those rooms, getting to it might be long and downright cold depending on the house.

With the advent of the heated toilet seat, you no longer have to fear the block of ice known as a porcelain throne. With this brilliant invention, using the water closet is now a pleasure rather than a baring of freezing proportions. Depending on what part of Japan you’re in, temperatures can dip very low, not to mention the accompaniment of cold winds. This makes the comprehensive public transportation system a natural part of every day life, especially since gas is so expensive.

Now, the wait for your train may be chilly, but then you enter the train with heated seats. Oh the bliss of sitting down onto a seat with heaters blowing hot air onto your legs! While other countries might have warmer temperatures, who cares when you can be warm and cozy while you ride? When you get onto a train or subway in Japan, you’ll notice that just about everyone has a phone out. Usually it’s either with an earphone or – if you happen to look over a shoulder or two – an online game. What you don’t see (or hear) is someone talking away on their phone. In fact, it tends to be a very quiet ride.

It could be that the Japanese are private people who don’t feel that a train car full of people want to know their business. Or, it could be they actually follow the rules of the sign that says passengers shouldn’t talk on their phones. For those of you tired of hearing about other people’s drama in an enclosed space from which you can’t escape – rejoice! There is speculation as to the distinct lack of garbage cans in Tokyo. While theories abound, from saving money to an increase in recycling, the prevailing story is because of the 1995 domestic terrorist attack that evolved around sarin gas and garbage bags. For all the reasons above, rubbish bins are a rare sight in Tokyo. It’s common to see people put their trash into their pockets until they come across one of the few and far between garbage cans. Amazingly, trash does not litter the sidewalks as you would think. In fact, there is a distinct lack of litter in public places in Tokyo. The ingenious idea of having one machine that washes and dries clothes means more space in tiny houses. The Japanese are known for their neat and orderly habits, which is also reflected in their gardens. Each bush, tree and water feature is meticulously trimmed and cleaned within an inch of what is proper and correct. If you value a space where everything is satisfyingly in its place, Japanese gardens are for you. Vending machines in Japan are a marvel of packaged foods and fun in a convenient 24/7 box. Need a drink? Fresh food? Manga? There is likely a vending machine or three close by, even in the most random and unexpected places, with just about anything you could need or want. This isn’t your typical, dirty convenient store. 7-Elevens are reasonably priced and on every corner. It’s a magical place where you can buy fresh, healthy food, pick up trinkets, exchange currency and pay your bills all at once! Plus, unlike 7-Eleven stores in North America, you never have to speculate on how many years it has been since the floors or bathrooms saw a cleaning implement. The bullet trains in Japan, known as Shinkansen, are among the fastest methods of mass transportation in the world. Going at a maximum speed of 320 kmh/200 mph, these trains can take you from Tokyo to your destination in less than half the time it takes to drive a car there.

In comparison, Acela Express, the fastest train in the United States, goes 150 mph. It should also be noted that, everywhere you hear or read about these trains, the timeliness of each train is touted. If keeping to a schedule is important to you, this is a bonus throughout the Asian country. The Japanese love their mascots to be happy and loving. This is played out at stores, hospitals and other businesses who have cartoon-like mascots that can be either human or anthropomorphic animals. Even better, they sometimes have an employee dress up as the gigantic walking mascot that hands out free goodies to people passing on the street. From tiny first aid kits to stickers with emblems of the company name and mascot, what’s not to love about happy cartoon characters that come to life and give away freebies with a cheerful little wave? This form of performance singing most likely started in Japan, where it is now an art form. There are specific businesses created solely for the purpose of catering to the amateur wanna-be rock star. Even better, you have choices: you can go to one of the larger rooms and sing in front of a crowd of people, or you can go into a small room set up with a TV screen where you and as many (or as few) people can witness your vocal talents, or lack thereof. In Japan, going to a party or bar after a long day of work is a national pastime. What’s more, singing your heart out, whether to a crowd or with a few friends, is the perfect way to blow off steam.

Visit our Japan information page to learn more about starting your journey as an ESL teacher and teaching English abroad in Japan. If you’re interested in getting your TESOL/TESL/TEFL certification and teaching in Japan, request a free course guide or call 1-800-779-1779 to learn more.