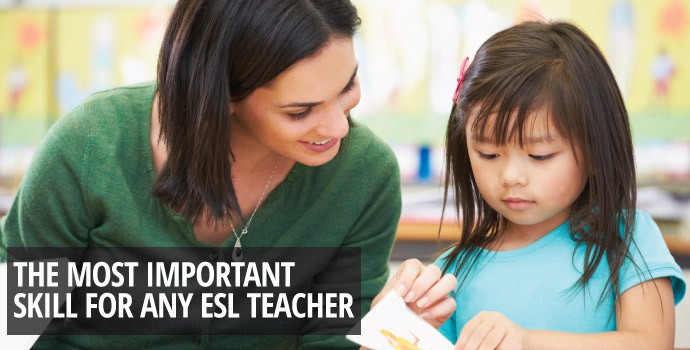 The Most Important Skill for Any ESL Teacher

Whether you are traveling in your new country or teaching a class, things don’t always go according to plan, so it is important to be able to think on the fly and improvise. Improvisation is the most important skill for any ESL teacher to have. Sometimes, your quick thinking is rewarded with an even better outcome than you expected. To illustrate this point, let me tell you about my experience with George, a student I had while teaching English in Taiwan.

When I had first heard about George, I had been working at a new school on the outskirts of Taipei for only about a month.   I was writing a lesson plan, making copies, and chatting with a group of teachers in the teacher’s room waiting for our classes to begin.  One teacher was particularly frustrated that evening, speaking in very strong terms about one particular 10 year old student who never failed to sabotage nearly everything he tried to do in class.  Many of the other teachers nodded in exasperated recognition of the name and the behavior, and confidently asserted the certainty of George’s alliance with, or relation to, Satan.  One teacher mentioned that George once even bit a teacher who no longer worked there.  I was angry for this teacher, and I was extremely relieved that I didn’t have this student in my class.

Students advanced through the schools program in 10-week classes.  At this point, we were about half way through a 10 week cycle.  I had a GREAT class.  All the students were cooperative, smart, fun, eager to learn, and eager to please.  I knew that this type of class doesn’t come along very often, and I looked forward to each class.  They were the type of class that push you to be a better, more creative teacher because you want them to have fun and learn as much as possible.

One evening, after my classes were finished, the manager asked to speak with me.  She appeared apprehensive, as if she had some bad news.  Did someone die? Was I fired? No, it was worse.  She told me that starting the next day, George would be joining my class.  Masking my frustration, I asked her why.  She said that he was having some difficulty with this current teacher.  Well aware of his reputation, I reluctantly asked what type of difficulty could prompt a change half-way through the 10 week cycle.  Apparently, George had bitten another teacher.  I didn’t bother asking why he wasn’t expelled, this was a business, and a minor attack such as this was not nearly enough to walk away from the tuition his family was paying. But I did ask, “Why me?”  She said that I was next, it was my turn, and that she was impressed with my classroom management skills. And, she added, “You are bigger than the other teachers.”

Again, I had the perfect class, and George not only threatened the learning, fun, and harmony of the class, but also threatened my skin!  I honestly didn’t know what I was going to do.  The next day my class started smoothly, as always.  George walked in a few minutes late.  I improvised.

“I am George,” he said with a big smile on his face.  The class began to giggle a little.

I told him to wait there for a second.  I slowly picked up my roster, pretending to read each name carefully, shaking my head, squinting my eyes for effect.

“I’m sorry, I don’t have a George on my roster.  You had better go check with the office.”

“They told me to come here,” he said, confused.

“Sorry, George, go check with the office, they’ll help you.”

George turned and left.  I turned to the class and gave them a wink and a smile.  I let George get to the elevator, and then I called him back to class.  The class laughed when he returned.  I could see on his face that he knew I had pulled one over on him.  He smiled.  The class knew that I was in control, and so did George, and he respected me for it.

Later in the class, I called on George and asked, “Sorry, what is your name, again?”

“George!” he said and started laughing.

George was never a problem in my class, and he actually added a new sense of humor that benefited our class, and made it even more fun. Improvising can be a high-wire act, and I got lucky this time, but it is an essential skill for anyone interested in traveling and working as an ESL teacher abroad.

Want to learn more about teaching and traveling in Taiwan, and many other countries? Sign up for a free information session or download our Course Guide! Kevin McLaren taught English overseas for 2 years in Thailand, Vietnam, and Taiwan.   He has been teaching ESL for 10 years.  Kevin has a Master’s in Education. He currently teaches English at Tacoma Community College in Tacoma, Washington.

How to Teach ESL to Middle School Students [Video]