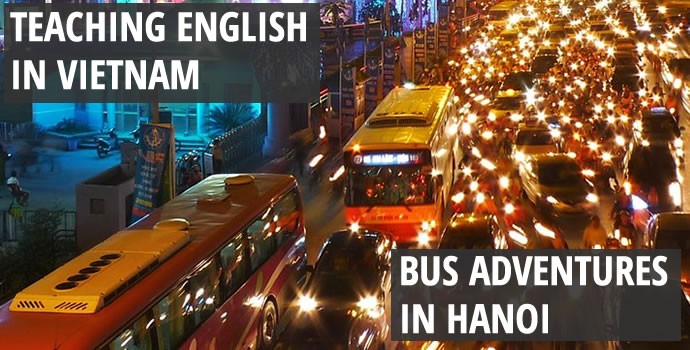 I had been teaching English in Vietnam for a few weeks when I finally figured out which bus to take to work.  The bus system in Hanoi is quite a puzzle, but I found a bus that took me nearly door to door.  There was no shortage of buses on Hanoi’s crowded streets, some big, some small. The small buses seated only about 14 people, and there was room for about 6 more people to stand, depending on their size. They had typical automatic doors, plus an ordinary side door you see on any van.  I took a small bus, #23, to work every day, which often proved to be comically problematic. I waited at a bus stop every afternoon before work where an older woman in her pajamas sat on the curb with a small TV dinner tray table.  Men slowed down on their motorbikes and bought from her what I would later learn to be illegal lottery tickets. For some strange reason this woman spoke to me every day in Vietnamese as if I understood everything she was saying. After many ignored attempts to make it clear to her that I had no idea what she was saying, I just started speaking back to her in English. I would say, for example, “The Mariners? This year?  There is no way, they don’t have the pitching!” There was never a lull in our conversations.  She always smiled and waved good bye as I boarded the bus.

The bus fare was 3000 dong, about 25 cents. Like any time one boards a bus, I sat down in the first empty seat available, but if there were no empty seats, I would sit next to someone. In Vietnam, or at least in Hanoi, or at least on Bus 23, they don’t seem to have the same sphere of personal space as we do in the U.S. At home, if there are empty seats, usually a new passenger will choose the empty seat. But quite often on my commute to work in Hanoi, I would be sitting alone and someone would sit down right next to me, even if other seats were empty, and occasionally, even lean on me, as if we were reunited friends or I was a large pillow. Sometimes they would camp their arm on my shoulder like a high arm rest. I didn’t budge because “when in Rome”, and it was a short ride.

I had seen smaller buses in cities before, but what was different about these buses was that the ceiling was quite low. I am 6 feet tall, and the ceiling was only about 5’10”. In Vietnam, I am a large man. There were no handles on the seats or dangling from the ceiling. So, I would stand with feet shoulder width apart, crouched a bit, ready, because unless I took this defensive position, I could easily be thrown off balance with potentially destructive consequences. I’ve been an athlete my entire life, but this was a unique challenge. The bus driver, forced to navigate through swarms of motorbikes, muscling his way around cars and the occasional brave pedestrian, taking the holes offered to him, often had to make sudden starts, stops, and very quick sharp turns. I had to pay very close attention because if I didn’t, I could easily knock down everyone standing, or fall embarrassingly into someone’s lap. Each time I knocked someone over, I would apologize profusely, and help them up. At least a few times, the bus made another sudden move, and I would knock down the same people I had just helped up.

Riding this same bus nearly every day, I started to notice that it was often the same driver. One day, after some human bowling, me the clumsy ball, he smiled, and then slapped the seat next to him a few times, inviting me to ride shotgun in his tiny bus. The bus had big front windows where everyone could look in, stare, and finally, smile, but I was never quite sure if it was at or with me. Who was this man and why was he riding shotgun? I hopped out at my stop, the people staring, not used to seeing the passenger side door ever open on the bus. I nodded confidently and smiled and went on my way to work, consumed by the humidity, heat, and crowds of people. Kevin McLaren taught English overseas for 2 years in Thailand, Vietnam, and Taiwan. He has been teaching ESL for 10 years.  Kevin has a Master’s in Education. He currently teaches English at Tacoma Community College in Tacoma, Washington.