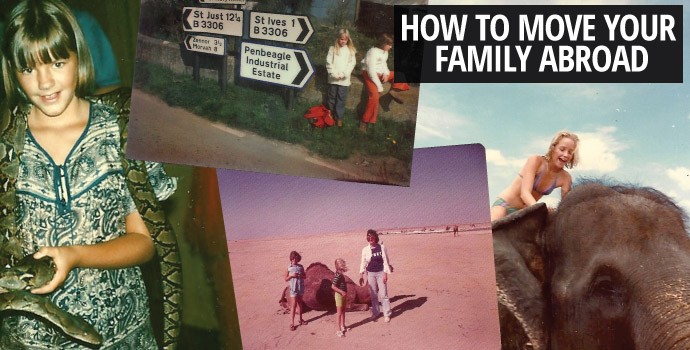 How to Move Your Family Abroad

It was mid-August in Southern California and our daughters were still very young. Lara just finished kindergarten and Lisa was ready for third grade.  Both went to school a few blocks from our home and would be starting classes in a couple of weeks. Late one night, I got a phone call from the business manager of a school in Saudi Arabia. Would I be interested in a job teaching English abroad?  The interview would be next week and I would need to begin in September if I got the job.  And, by the way, my wife (not a teacher) would be expected to teach as well. And we could bring the kids. To make this part of the story short, four weeks later we stepped off of the plane at the old airport in Jeddah. Riding an elephant on the beach in Sri Lanka

For Lisa and Lara, it was the best decision we ever made.  It changed their lives in the best possible way and opened opportunities for them that never would have been imaginable had we not taken this step.  We stayed in Saudi Arabia for a few years, travelling throughout the region whenever school was closed. We moved on to other countries every few years, always with the girls in tow. Eventually, they returned to the States when it was time to begin college.  Lisa is now the director of a spa in Bahrain and Lara went on to be a flight attendant with a major airline, flying exclusively on international routes due to her ability to speak Dutch, Italian and Spanish.

Teaching English Abroad with a Family

Never for a moment did they look back and say that they were sorry that we took them away from their friends and their school. Of course they missed many experiences that most American kids have, but those all paled in comparison to the experiences they had overseas: Meeting their first camel in the Empty Quarter

There is a lot to think about before you begin to untie the strings that bind you to home. As parents, you, of course, have to worry about the logistics – their education (home school if you have to), living situation (yes, they will survive if they don’t have their own room!), safety (always a big concern, but there are plenty of resources available to guide you).

If your kids are older, they may initially resist leaving their safety net of friends, malls, internet, etc. But once they are in their new spot, they will quickly see that there are lots of other kids who are also in a new and strange location. My daughters met kids who were so excited about meeting newcomers and inviting them into their social circle.  These are friends that they will stay in touch with no matter where they (or their friends) are.  Lara still visits and corresponds with friends that she “left behind” over 25 years ago.

Of course there is a lot to think about as you get ready to go, but there is no need to worry about packing up all their “stuff” that they can’t live without. With families constantly moving on, there are always plenty of things they will be trying to sell or give away before they go.  One of our first lessons was that we didn’t need the six giant suitcases filled with things we assumed we had to bring along – books, games, toys…. we could have found it all cheaply through the expat social network.

How to Get a Job Teaching English Abroad

Available exclusively to Oxford Seminars TESOL/TESL/TEFL Certification graduates at no additional cost, our Job Placement Service provides assistance with finding teaching jobs at ESL schools in Thailand and around the world. We have formed partnerships with language schools worldwide that are searching for certified ESL teachers. Our Job Placement Advisors provide timely job placement assistance to help make your experiences abroad as rewarding as possible. Roger spent almost 20 years working in schools in Saudi Arabia, Sri Lanka, Italy, Egypt, and Portugal. Since returning to the USA, he has been teaching ESL classes for international students at the University of Colorado (Boulder) and the University of Oregon (Eugene).