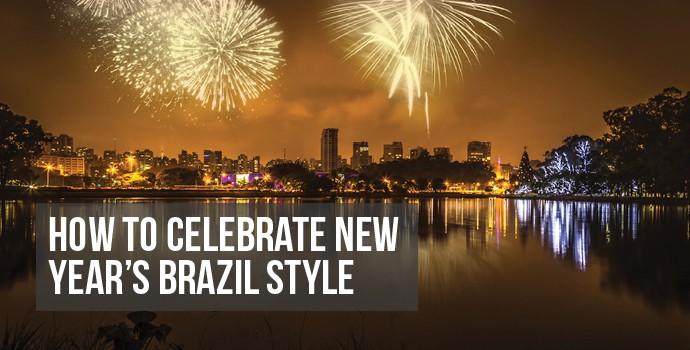 With the largest landmass of South America and nearly half of the population of all of South America, Brazil is a colorful mix of history, race and traditions. Being one of the largest countries in the world, Brazil has big cities and big destinations whose names are legendary. The Amazon dominates the northern part of the country, which contains the world’s largest tropical forest park, Tumucumaque National Park. The city of Sao Paulo is one of the largest cities in the world and is in the same southeast region as Rio de Janeiro, one of the more colorful destinations to live. From the resource-heavy rainforest to the tropical savanna to the beautiful coastlines, Brazil is a breathtaking land with so much to explore and learn about as an ESL teacher.

It’s only fitting that such a rich land would have a corresponding history and tradition to match. None more well-known and visited than Ano Novo or Reveillon, the country’s New Year’s celebration, in Rio de Janeiro.

This holiday is celebrated around the world, of course, but there are traditions woven into the experience that make it more than just a marking of time passing. In Brazil, Reveillon has significance, from what you wear to what you eat and do.

Because of a heavy influence of Umbanda and Candomble, two different but similar religions that combined with Catholicism and Spiritism, brought over by the African slaves, the practices and traditions held on New Year’s are steeped in mysticism and spiritual beliefs. A worshiper praying to Yemanja, goddess of the ocean. Photo by Vince Alongi on Flickr

For instance, in the religion, there is a goddess named Iemanja, or Yemanja, whose “celestial body” is the ocean. It is important to appease her with gifts such as flowers on New Year’s Day, or the day before, light candles and throw flowers toward the sea. It’s said that if the goods were sent back, they were not accepted.

It is also considered good luck to jump over 7 different waves while making New Year’s wishes (it is also said that if not at the beach in Rio, you can jump 3 times with your right foot). Fortunately, for Brazil, the New Year is celebrated during their summer, so wave-jumping feels good. This is not a polar bear plunge situation, so you won’t have to worry about the cold interfering with your good luck efforts.

Another tradition involves the clothes one wears. The base color you’ll wear to a celebration is white. Beyond that, you can wear different colors to attract different luck:

Rio de Janeiro isn’t the only place where Ano Novo is celebrated, of course. It’s simply the most popular, where millions of people have traveled to celebrate Reveillon. The well-known beach, Copacabana is one of the most popular sites for the fireworks show and will most likely be very, very crowded. You’ll also most likely get doused with champagne, but that’s okay because it is also considered good luck.

Once you’ve seen the fireworks, it’s time to move on to a meal. It is believed that eating the right types of food will ensure a more prosperous year ahead. Here are customs and traditions associated with food for Ano Novo:

Brazil, with its storied history and interesting tradition, would be a great place to begin your career teaching English abroad. You’ll be deeply immersed in a unique culture that blends pieces of races and beliefs from all over to create a new creature all its own, with the chance to build your own storied history including fantastic tales of the New Year in Rio. What are you waiting for? The New Year is the perfect time to start your adventures teaching English abroad, and Oxford Seminars is the way to get you there.

Interested in learning more about what Brazil has to offer? There are several ways to get more information: you can visit our website, call us at 1-800-779-1779 or attend one of our free information sessions near you.