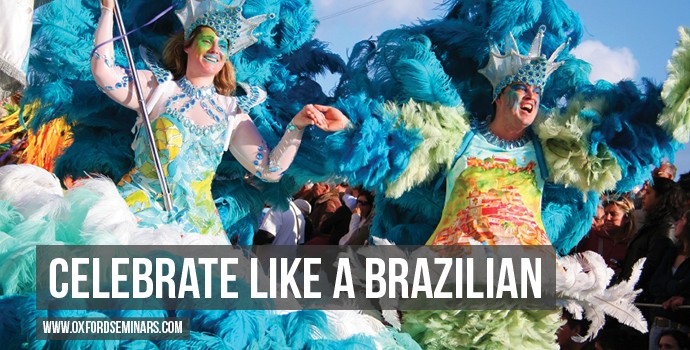 Brazil is the largest country in South America, accounting for nearly 50% of the continent’s mass and holding over 2 million people. Boarding the Atlantic coast, Brazil touches nearly every other South American country. With such a storied past and rich heritage, it makes sense that Brazilians would have celebrations and festivals equally rich and steeped in traditions. And they know how to party – some celebrations can last days at a time! As a result, it’s no wonder that this country is such a popular vacation destination. Fireworks celebrating new year on the beach of Bombinhas in Brazil

The New Year is one of the most important days of the year for Brazilians. Its religious overtones give this traditional holiday more significance than bringing in the new year. New Year’s Eve in Brazil usually involves wearing all white as a symbol of peace and renewal for the new year. Once the clock has struck midnight, tradition has it that Brazilians run to where the water meets the sand to honor Iemanjá, the goddess of the sea, hopping over seven waves and making a wish with each hop. Costumed dancers at carnival in Brazil. Photo by Prefeitura de Olinda on Flickr.

This five day festival is perhaps one of the most well-known celebrations in Brazil. The bacchanalian party is held before Ash Wednesday, signaling the beginning of Lenten Season when a type of fast is observed for 40 days. The carnival is thought to have evolved as a way to indulge before fasting from meat, alcohol and other “sins” prior to Lent. While this celebration is known all across the globe, the events in Rio Di Janeiro and Salvador are considered some of the largest carnivals. In fact, brazil.com says that the Salvador carnival is the largest street party in the world!

In most places, the streets are closed down to allow a parade of costumed dancers who are usually dancing to Samba music. As calendarlabs.com explains, “Carnival in Brazil is a major holiday when people shut shops and come out on the streets to celebrate life.” New Jerusalem: Open air theatre in which yearly is played the Passion of Christ. It is located in Brejo da Madre de Deus, some 110 miles away from Recife. Inside the theatre there is the Passion Inn (Pousada da Paixão), originally built to host the actors, but now accessible to anyone all-year round. Photo by Márcio Cabral de Moura on Flickr.

Passion Plays are held all over the world. This tradition was started by the Catholic church, and the plays are typically held the week before Easter. In New Jerusalem, Brazil, however, the tradition draws a crowd of 10,000 each year.

In a little desert town not too far from Recife, Paixão de Cristo, or The Passion of Christ, reenactment plays are held nightly, with famous actors portraying different characters and 500 costumed extras. The play is supposed to last roughly 2 hours and, according to catholicsandcultures.org, it has a bit of a carnival feel to it. “People gather there early under a string of huge tents that sell fast food, local crafts and an array of inexpensive items like handbags and shoes.” Brought over from Portugal in the 16th century, Festa Junina is a month of festivals to celebrate 4 saints: Saint Anthony, Saint John, Saint Peter and Saint Paul. The celebrations also coincide with the winter season when old ground is cleared and the ground is prepared and planted for the new harvest.

The celebrations are usually held during the weekend. According to thebrazilbusiness.com, it’s traditional for people to go dressed in checkered clothing and play games to win prizes. These quermesses, or bazaars, have food, music, dancing and games. The bull in Bumba Meu Boi folklore. Photo by marcusrg on Flickr.

Usually held mid June, this folk festival began over 100 years ago to celebrate a traditional tale. The story varies from location to location, but the general story depicts a beloved bull that dies at the hand of a cowboy. In order to escape a death sentence, the cowboy has a holy man pray over the bull, which miraculously brings the bull back to life. The story is celebrated with a retelling of the play each day with costumes, contests and puppetry, along with street celebrations. According to boibumba.com, the city Parintins is where one of the biggest festivals is held. “The main square, countless bars and every little corner near the Bumbódromo accommodate a crowd still full of energy to mimic the dance and songs of their favorite Boi.”

With such history and zest for life, Brazil is an excellent place to be an ESL teacher! If teaching English abroad sounds like something you’d be interested in learning more about, you can visit our website or attend one of our free information sessions near you.