﻿ Culture Shock! How to Plan for it and Make the Most of Your New Adventure - Oxford Seminars Blog ﻿ 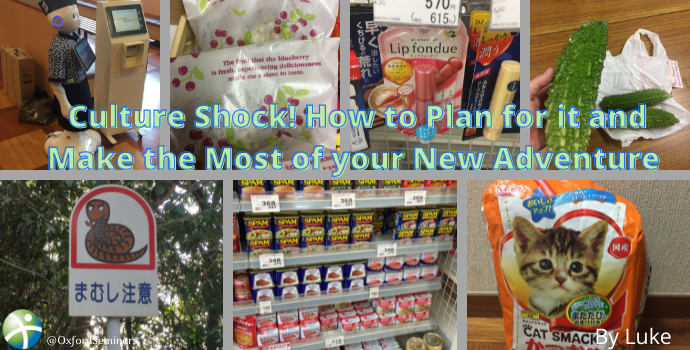 Culture Shock! How to Plan for it and Make the Most of Your New Adventure If you’ve been considering a career abroad, you’ve probably run into the term “Culture Shock” more than a few times. This expression gets bandied about in expat teaching circles quite a bit, but if you’re planning to move overseas for the first time, it’s important to make sure you have an in-depth understanding of this issue. That’s what I’d like to help with today, as well as offering some advice on how to deal with it, based on my own experience spanning 11 years living and teaching in Japan. Most common definitions of culture shock go something like this: “…a feeling of disorientation, experienced by someone who is suddenly subjected to an unfamiliar culture, way of life, or set of attitudes.” This sounds about right to me, but I would add that disorientation is only one possible reaction, among a range of possible reactions. The particular symptoms of culture shock that each of us may experience will depend on a number of specific factors including: where we’re from, where we’re going, our past experience, our personalities, our expectations (or lack thereof), and many more. The severity of your particular symptoms can also vary. You may experience no culture shock whatsoever, you may feel disoriented, or you may want to get on the next plane home – depressed and thinking that you’ve made a terrible mistake. Avoiding that latter outcome depends on, in my experience, taking steps to address those factors that are actually within your control, and being truly honest with yourself about anything that isn’t. Many ESL organizations (Oxford Seminars included) take steps to counsel teachers about culture shock, and this is a great help, to be sure. Our website helps in recognizing symptoms, and in offering advice about how to mitigate culture shock. This advice, however, is largely directed at those who are already experiencing culture shock, while I believe very much in the old adage that ‘an ounce of prevention is worth a pound of cure.’ As a Psychology major, I was very much aware of culture shock before I went to Japan, and I believe this knowledge helped a great deal in arming myself against it. That’s why I want to talk to you about what you can do before you get on the plane, to make sure that you get the most out of your ESL/EFL teaching experience from day one. Let’s take a look at the factors mentioned above. Where you’re coming from will have a significant impact on your openness to new experiences, believe it or not. An awareness of how much or how little your culture has prepared you to experience a foreign culture can actually allow you to do some damage control, especially if you suspect that it hasn’t prepared you very well. That said, judging your own culture’s attitudes toward foreign cultures may not be an exact science – especially if your own culture is all you’ve ever known firsthand – but if you look back and see a lot of gaping holes in what you were taught about other cultures as a child, then filling in some of these holes on your own will serve you well if you plan to travel abroad.

The next factor, where you’re going, ties in very closely with the first. This is because it’s the difference between where you’re from and where you’re going that often underpins just how much culture shock people actually feel once their boots hit the ground in another country. All other factors aside, if you’re going to a place where the culture has nothing in common with the culture you’re leaving, then it’s safe to expect a period of adjustment will be in order. So, how could you mitigate this? Knowing that it’s coming is half the battle, but the more you know about the new culture, the less of a shock you tend to feel, so some prior research can go a long way. Going from Canada to Japan was, for me, quite a stark contrast, but having studied the culture and history of Japan for years definitely helped a lot. This leads us to past experience. I found that most of the people in my circle had something in their past that tied them to Japan, and as such, they found certain touchstones to give them comfort in their transition to daily life there. My martial arts background and lifelong interest in the history of Japan acted as a cushion of sorts, softening the impact of being suddenly transplanted there. A little familiarity or a few common threads can go a long way in adjusting to life overseas, and so these are the placement options that I would prioritize when deciding where to go. It can be a fun adventure to go somewhere completely new, but without anything in your experience to guide you, the honeymoon phase can wear off quickly.

Next, you have to be honest about how your own personality will influence your experience in another country. Personality type, including factors like openness, extroversion, agreeableness, conscientiousness and neuroticism, play a big role in how well suited you are to adapt to new environments. While someone scoring high on the first four might adapt to a different culture with relative ease, someone more closed, introverted, or confrontational might find that a more familiar culture is the best choice for them. Some cultures also tend to value certain traits more than others, so in a way, your choice of country can be a means to play to your strengths. For me, a person who naturally values discipline, politeness and cleanliness, Japan was a no-brainer. Finally, it is worth recognizing that there is truth in the saying “our expectations determine our reality”. Most disappointment stems from unrealistic expectations, and conversely when we keep our expectations low, we often tend to be pleasantly surprised. Managing expectations, perhaps more than any other factor on this list, can make the difference between enjoying an experience for what it is, and resenting an experience because it isn’t what we envisioned. If you can train yourself to stay in the moment, small disappointments won’t build into something worse over time, and this is a skill that can be honed with practice.

Culture shock, I have to admit, didn’t play much of a role in my time overseas. I believe the reasons for this are that I come from an open culture, I picked a destination I was familiar with, my personality traits lined up well with those that are valued in Japan, and I was careful to manage my expectations. With a little planning, I’m convinced that anyone can do the same. 5 Destinations in Slovakia to Add to Your Travel Bucket List