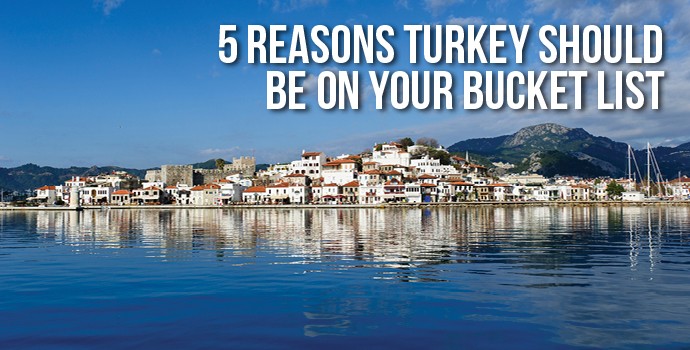 Split between two continents, Turkey is a country that lies on the southeastern corner of Europe and the western part of Asia. Turkey is bordered by four different bodies of water, the Mediterranean Sea in the South, the Aegean Sea in the West, the Black Sea in the North and the Sea of Marma in the middle of the country. A visit to Turkey is not something everyone plans, but it should be. Take a brief tour with us giving you five ways Turkey plays to your senses that will make you want to add the country to your bucket list, and possibly, to your TESOL teaching journey.

Momentous Sites along the Çanakkale Coastline View from ferry of Canakkale. Photo courtesy of Lacee Floyd.

Çanakkale is a seaport town on the southern coast of Turkey that is split between two different continents, Europe and Asia. To get to the different sides of Çanakkale, visitors must take a ferry across the Strait of Dardanelles. The ferry gives riders an excellent opportunity to sight-see and take in all of the Turkish scenery around them. There are many hotels along the coastline to accommodate vacationers and those traveling to the city.

Çanakkale is also the closest major city to the ancient city of Troy. Visitors to the city can see the wooden horse from the 2004 Brad Pitt movie Troy displayed at the seafront. Another popular attraction around Çanakkale is Gallipoli, a famous World War I battleground fought between the British and the crumbling Ottoman Empire.

Best friends and roommates Kristen Bauer and Lacee Floyd traveled to Çanakkale during a spring break trip to Turkey.

“I think one hidden gem would be the beach we stayed on in Çanakkale,” said Floyd. “We had to take a ferry to get there, and it was on the Asia side of Turkey. It was just a small town on the Atlantic Ocean and the roads were all along the ocean side – so every road trip we took was gorgeous.”

Sounds of the Spice Bazaar Similar to the geography of Çanakkale, the city of Istanbul is split between two continents and also has a lot to offer visitors. According to Bauer, when she visited the city, one of her favorite locations was a spice market called the Misir Çarsisi (Spice Bazaar), located along the shore. She believes this market and the way its energetic atmosphere immerses all visitors is the strongest reflection of true Turkish culture.

“It was a really big place, but each little individual vendor would try to say something to lure you in,” Bauer said. “They would call us names to get our attention, and we even stopped to take a selfie!”

“I loved seeing that little spice market,” she added. “It made the trip for me.”

Due to the powerful impact this market has on visitors, many tour groups travel through this spice market.

Aromatic Smells of the Spices Spices at the market. Photo courtesy of Erin Strickland.

Spices are a large factor in the exotic Turkish cuisine that visitors can experience while in the country. While walking around in the Misir Çarsisi, the smells of multiple spices, both familiar and new, will permeate the air around you.

“It was similar to walking into a candle store,” Floyd said. “There are so many different smells combined that you can’t tell what you are smelling until you actually get down close to one.”

Kekik may be an unfamiliar word to English-speakers, but when translated, the word means Oregano or Thyme. Both words translate into the same word in Turkish. Dry kekik is a spice featured in many different Turkish meat dishes such as meatballs, kebabs, meat marinades, and soups.

To add some heat to dishes, the Turks put Pul Biber into their dishes. Pul Biber is Turkish for Aleppo pepper, which is essentially red pepper flakes. An extremely common spice in Turkey, Pul Biber is put on pretty much anything to add some zest to it. Often, Pul Biber can be seen as a staple on Istanbul house tables right next to the salt and black pepper.

Nane, also known as mint, is another extremely potent herb used in Turkish cooking. Nane is commonly grown by Turkish households so that they may choose to add fresh Nane to salads or dry Nane to multiple other dishes such as soups, pilafs, and poultry.

An extremely popular, and the most notable, dessert in Turkey is Baklava. Baklava is made of very thin pastry dough, called filo, filled with chopped nuts, and held together with honey or syrup. (Check out this yummy recipe!) “I got some from this little shop by our hotel the first night in Istanbul, and it was amazing!” said Bauer.

Baklava is a Middle Eastern dessert that originated in the former Ottoman Empire, but can be found all across central and southwest Asian countries as well.

The preparation of Baklava varies from country to country, and in Turkey, it even varies region to region. In the Black Sea region, Baklava is filled with hazelnuts. The city of Gaziantep is actually famous for their Pistachio Baklava. In other parts of Turkey, Baklava is topped with ice cream or Kaymak which is also a dairy product.

Giving a Rug-Maker a Hand In Çanakkale, Floyd and Bauer were given a special treat. Some rug-makers invited the girls to come and sit side-by-side with them while they put together their rugs. They were first taught how to make the rugs, and were then allowed to take part in the actual process of weaving a rug.

“They gave us their whole show,” Bauer said. “They laid all of the rugs out for us and let us walk barefoot on them.”

This allowed them to really experience the talent and intricate weaving that goes into the making of these handmade rugs.

“It was so interesting to see them working on such intricate work and doing it so quickly and with such ease,” Bauer said.

Following the demo, the girls were invited to lunch with the artists.

“They were some of the nicest people I’ve ever met!” explained Bauer. “Some of the rug-makers even made us friendship bracelets. It was one of my favorite days.”

The Perks of Teaching Abroad

5 Reasons to Teach in China