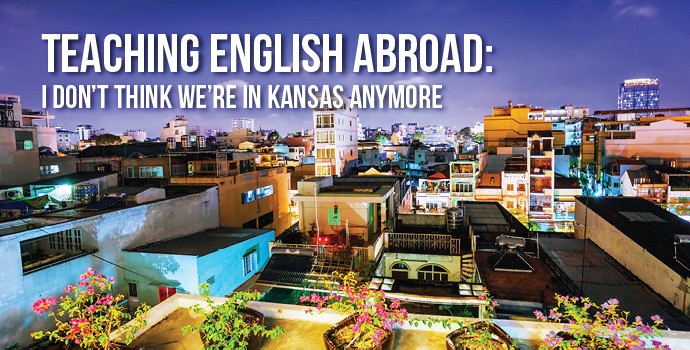 When you live in foreign countries, you occasionally have these moments where it suddenly all hits you: I’m not in ________ anymore! For me, Canada is home, so traveling to another country can have it’s share of adventures. The story I’m about to tell describes one of my own “WHERE IN THE WORLD AM I?” moments from my time teaching abroad in Vietnam. The last hour has been both one of the best and one of the worst hours of my life. I’m sitting at a bar with a friend 10 feet from my parked motorbike, chatting away about the bike in all it’s glory. Suddenly, a man drives by hidden under his rain poncho. Within seconds, my brand new pretty, purple helmet has been plucked off my bike, gone forever! I try to call to anyone who can hear to catch the thief, but it’s no use. He’s long gone. But it’s okay. His daughter or sister or mother probably needs that $4 helmet more than I do. There are more where that one came from. I’m also glad it wasn’t my purse. Motorbike purse snatchers are a real thing to fear in Ho Chi Minh City.

After recovering from the hilarity of this situation, a nd waiting for the rain to die down, I decide the rain is light enough to continue on my journey home. Since my sense of direction is beyond horrible, I’m lost in the mess of Saigon’s curving, one-way streets within minutes. Under normal circumstances, I would pull to the side of the road for a quick glance at Google maps. But now, the rain has picked back up and is at cats and dogs’ levels. Every time I try to use my phone, the raindrops win. I lose. I can’t see anything. It’s now a full blown lightning storm. But it’s okay, because it’s been 40 minutes of driving in torrential rain with next to no visibility, but at least I’ve found the main street I need. Unfortunately, so has the rest of Saigon. It’s rush hour and the hundreds of motorbikes surrounding me are at a stand still. After 10 minutes of not moving an inch, I finally scoot around a bunch of cars. I think I’m finally on my way, when suddenly I’m cut off by an 80-year-old woman driving her motorbike while carrying four gigantic palm trees. Surprisingly, that’s not the craziest thing I’ve seen on the back of a 50cc motorbike. A three-seater couch – let me tell you, THAT was something to see! Unfortunately, when she cut me off, I had to put my feet down for balance, and the street was flooded with calf-deep water. Still, there was only one casualty in this incident. One new blue shoe, which was now swimming in the floods of Saigon’s streets.

After finishing my drive home with one shoe, I’m finally on my couch, more soaking wet than I will ever be again in my life. And, I’m laughing hysterically! I still can’t believe the last hour of my life wasn’t just a dream.

It’s adventures like this that, in many cases, only fellow TESOLs or others who have jobs abroad can relate. My story could have happened in Canada or the United States, but it wouldn’t have been nearly as fun. Who’s ready to set out on their own adventure and create unforgettable experiences?

6 Lifehacks for Living and Teaching ESL in South Korea

Why Should I Teach Abroad? – See the World & Change Lives – Podcast