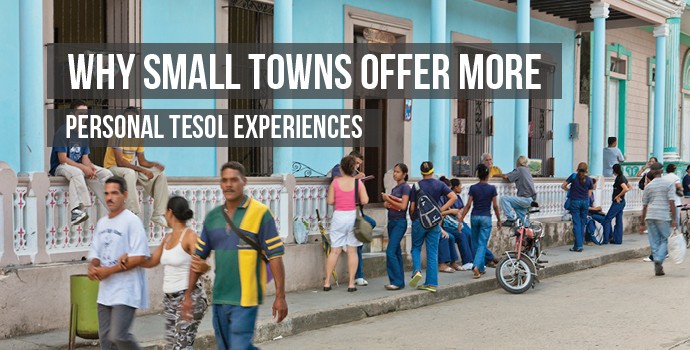 Small town or big city? Many of my friends and family members who have taught abroad have longed for the bright lights of the world’s largest metropolises such as Shanghai, Seoul, Taipei, Tokyo, Mexico City, and Madrid. Based on my own experiences teaching abroad, however, I recommend relocating to a small city or town. Here’s why. My first international teaching experience was as a volunteer English and physical education teacher at a polytechnic secondary school in Ciego de Avila Province, Cuba. After graduating high school, I decided to take a year off before starting university. Having studied Spanish already, I wanted to travel to a Spanish-speaking country, so I joined a youth volunteer organization and moved to the sugar mill town of Pina, Ciego de Avila Province. By living with a local family, I was able to enjoy an authentic Cuban experience complete with aguardiente (sugarcane liquor) night caps! I really became a part of the community and culture, which made for an invaluable experience.

People play a big role in small town culture. While walking to the school for work, I would repeatedly run into people I knew in the street. They would always offer to buy me food such as ice cream, pizza, smoothies or frituras (deep fried dough) from street vendors, despite their meager income. Smoothies and frituras became my breakfast of champions!

Since few people really spoke English in this town, I was able to speak Spanish all day and become practically fluent in a matter of weeks. I was often invited to the local clubs, where my new acquaintances were happy to, at least attempt, teach me salsa and merengue dancing. I made many friends in the community and became a regular at the town basketball court and  at the bar playing dominoes.

My experiences in Pina were so much more positive than trips to Havana, where I was pegged a tourist and people tried to sell me overpriced rum or cigars. Unlike in Havana, foreigners in my town were somewhat of a curiosity. People were genuinely interested in getting to know me. When I went to a restaurant or bar in my small town, people knew me, and I was charged the price on the menu instead of twice as much.

I made many great friends in Cuba, and while this initial visit was more than 15 years ago now, I have been back to visit my host family two times since and still stay in touch with them to this day. Detail of a painting at Gongsanseong at Gongju, Korea

A few years after graduating from university, I became less interested in working in my field of study and began longing for the adventures of teaching and traveling again. I knew I wouldn’t be able to pay off my student loans quickly in Latin America, however, so I spent a year teaching ESL in South Korea. I found a job at a hagwon, a for-profit institute, in the small city of Gongju, Chungnam province. The city had a population of only 100,000 people – rural by Korean standards.

At first, I was concerned about being out of my depth, not knowing the language or even the alphabet, but I quickly grew to love the place. There were about 50 or more other foreign English teachers working in my city at any given time, and I found people were friendly and happy to show me around. As a foreign teacher in Korea, you stick out like a sore thumb, so whenever I ran into another foreign teacher in the streets or on the bus I would introduce myself and in most cases, we’d become fast friends. In addition to my first friendships with Korean co-workers, I made friends from Canada, the United States, England, Ireland, South Africa and New Zealand. On the contrary, people I met who had taught in Seoul said they found that people tended to split into cliques and making a friend was rare. Despite the fact it was a small city, there were still a number of popular foreigner hangout spots, and people were always posting community events on the Gongju Folks Facebook page, which was a great place to learn more about the community. Being outside of the sprawling metropolis that is Seoul and its suburbs, we were very close to mountains for hiking and not too far from beaches for swimming. It was so nice to be out in the fresh air of the countryside, as opposed to the industrial and car-induced smog of a major city. And since Korea is such a small peninsula, with an excellent public transit system, I was able to get into Daejeon in under 30 minutes and to Seoul in 90 minutes for evening trips to Costco or weekend excursions to the traditional Namdaemun Market, Yongsan Electronics Market, concerts in Hongdae and the restaurants of Itaewon.

Similar to my experience in Cuba, as there were fewer foreign tourists venturing to this area of Korea, I found the locals to be very welcoming as well. The cab drivers always started up a conversation in English and were very friendly. In Seoul, the cab drivers would try to fit as many customers into the car as possible, and then charge me my fare plus the fare of the rider who had already been in transit when I got in! From a classroom perspective, I would often see my students on public transit, and it would make their day. We had such small classes of only 4-12 students per class, being in a small city, it was easy to get to know my students, their interests, and tailor my lessons with supplementary materials for enhanced student engagement as opposed to just teaching from the text book.

Everyone is different, but for me, the experience of being in a small town allowed me to become more acclimated with the people and the true culture of where I was. I also believe the relationships I was able to build are deeper since the pace was slower and more customizable for my surroundings. No matter where you go, everyone’s TESOL journey is likely unforgettable, but I’m very thankful my journey led me to small towns. Overall, I greatly enjoyed my teaching experiences in small cities and towns, and would highly recommend it for anyone with an adventurous spirit!

Rowan Lomas has taught in Cuba, South Korea and online to Korean students. He has been assisting Oxford Seminars TESOL/TESL/TEFL certification course graduates in finding teaching jobs abroad as a member of the Job Placement Service since 2010. An Oxford Seminars graduate himself, Rowan has also earned a Master of Education degree and remains keenly interested in the field of international education.