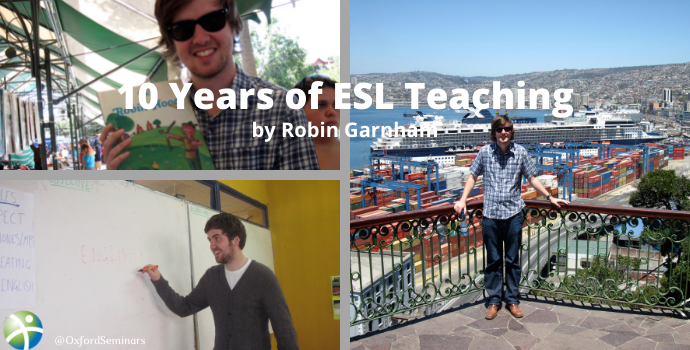 Looking Back: 10 years of Teaching ESL I recently celebrated my tenth anniversary as an ESL teacher. When I started in 2010, I would not have guessed that I would still be teaching ESL today. For me, teaching ESL was a means to an end. I wanted to improve my Spanish, and getting a teaching job in Spain seemed to be the easiest way to achieve that. And yet, here I am, ten years later. I cannot point to a single moment when ESL became my career. Instead, over time different things have kept me coming back to the classroom. Let me share my journey with you. I came to teaching ESL with a lot of trepidation. As a fresh graduate, I lacked confidence, which I thought would be a problem in the classroom. I was anxious about the prospect of dealing with rowdy students in a country that I did not understand. Ironically, it was teaching itself that gave me the confidence to be a good teacher. The students were not aware of my anxiety. Instead, they looked to me to guide them through the mysteries of the present simple, the compound noun, and the semi-colon. At first, I pretended to be an ESL teacher, and then, without realizing it, I became one. Since then, my confidence has continued to grow, helping me to progress both personally and professionally. After a few months of building my confidence, I began to enjoy being in the classroom. Without the stress, I was able to see that teaching ESL offered things that I had not imagined before. By that time, I had moved from Spain to Mexico, and I was teaching in a community college. I started to meet people, see places, and encounter ideas that I never would have come across otherwise. I cannot say that I underwent a dramatic metamorphosis, but I did begin to expand my perspective on the world. In the last 10 years, I have taught people from dozens of different countries, and countless backgrounds. In the classroom, I teach, but I also learn. I offer something, and I receive something in return. In a world of increasing division and inequity, my students have kept me humble and inquisitive. If I had stayed in the United Kingdom for my whole life, I would have missed out on much of the richness that the world has to offer. When I moved to the United States in 2013, I decided to continue to teach. I did not think about the decision too much as I enjoyed the job. Since then, I have taught at various different places around the San Francisco Bay Area, including for Oxford Seminars since 2015. Of course, there are many other job opportunities here, but I continue to teach because I like it. I have had my fair share of mind-numbing jobs, but being with a diverse group of students every day keeps things fresh. We chat, we laugh, and we share our life stories. I cannot say that I have loved all of my students. Sometimes, they are frustrating, rude, and temperamental, and, at others, they are witty, insightful, and hilarious. Either way, it is difficult to get bored. Despite loving what I was doing, there was something nagging at me. Growing up, I had a picture of what success looked like. I would wear a suit and tie. I would earn a large salary. I would climb the corporate ladder. I thought that if I managed to achieve that, I would feel contentment, perhaps even happiness. Deep down, I knew that I had adopted someone else’s version of success. I also knew that I did not have the drive and personality to become a white-collar executive. My first job in an office at 18 years old was humdrum and mundane. From 9:05, I was counting down the hours, then minutes, then seconds until freedom. Then, in 2019, I had a brief foray into working in Corporate America. I cannot say that I enjoyed it, which confirmed what I already knew. After that, I was able to go back to teaching without the nagging feeling that I was missing out on something else. I know that working in an office does not suit me. I have had jobs that gave a sense of dread when I opened my eyes in the morning, but I do not feel that about my current job. Teaching ESL works for me, and it suits my personality and temperament. It is not too stressful, it is varied, and it is constantly engaging. I enjoy what I do, and I should have accepted that before. Coming to terms with who I am and what I really want from a job has given new renewed conviction in my career choice. That in turn has allowed me to push my career forward. Since March 2020, I have worked at a non-profit in San Francisco. I feel positive about the work that I am doing, and I am surrounded by good people. In many ways, it is the culmination of all of my experience so far. I am running my own program, doing everything from recruitment to curriculum design, and from teaching to project management. I have found my groove and it feels pretty good.

Making a career as an ESL teacher was never my plan. I wanted to teach ESL for a couple of years, and then move in a more conventional direction. There were many points in which I could have changed courses, but I did not. Looking back, I think that was because I had a clear reason to continue teaching at every point. I am where I am for many reasons. I have come to enjoy the process of teaching ESL, the rhythm, the methodology, and the people. I am good at it, and there is a lot of satisfaction in simply succeeding at something. For most, teaching ESL is a transitory phase, but for me it is not. Robin Garnham originally planned to spend a year teaching in Spain to improve his Spanish, but he has now been teaching for 10 years. He currently works in the training and development department at a non-profit in San Francisco, California. He is an Oxford Seminars instructor in the Bay Area, California.

Cinco de Mayo Special: How to conquer Mexico as an ESL Teacher