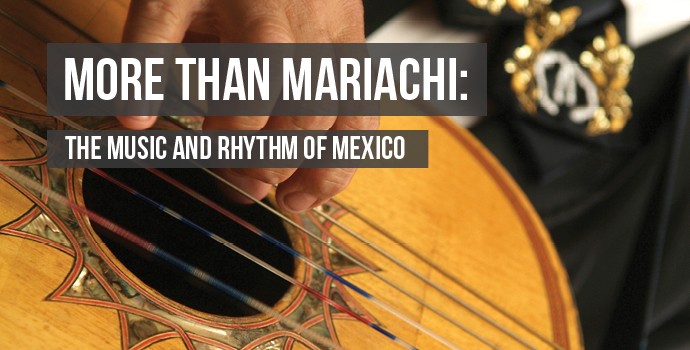 More than Mariachi: The Music and Rhythm of Mexico

One of the great things about teaching English abroad is discovering the hidden gems of a region. Sometimes it’s food (Kimchi grows on you eventually!), sometimes it’s the culture. Other times, it’s a sound or a note that catches you, like when it comes to the music of Mexico.

Music has always had a rhythm to it that makes the listener want to dance. It beats through the heart down to the legs so that the listener almost has to get up to dance. The traditional buoyant and colorful Mexican dancers with their flouncy dresses and embroidered mariachi hats all seem to celebrate life in their own fashion.

Music in Mexico can differ from region to region depending on the history and the terrain. With such a large country and storied past, it’s no wonder the music can vary widely. From Ranchera to polkas to mariachi, books have been written about the music you can experience there. The oldest music on record, however, is called “son.”

Son, according to latinmusic.about.com, is a “fusion of indigenous, African and Spanish traditions.” There are several types of son, such as son jarocho or son jaliscenses, each with different sounds based on the region. This is why son huasteco, born in the northeast region of Mexico, has it’s own distinct and unique sound. With only three instruments, son huasteco can still tell an emotional story. As Mary Farquharson, the music producer for the documentary “A Mexican Sound,” explained, “I think it has a tremendous intensity. It’s the Mexican specialty of a very painful joy or a very joyful pain.”

Roy Germano was filming a documentary in Mexico when he heard the music on CD for the first time. Betto Arcos, writing for NPR, wrote that Germano fell in love with the sound. He decided to go back to Mexico and film “A Mexican Sound” – this documentary about son huasteco.

Huasteco refers to a town in the state of San Luis Potosi, Mexico, where huasteco came from. Its rural, mountainous feel is reflected in the exuberance of the music and the voices, sometimes arching into falsetto, similar to yodeling in other musical cultures. The music is part of the culture now, explains musician Eduardo Llerenas. “…it is the desire of the community, they love this music, they have been born to, they dance to it [and] they drink to it,” he says. “So it’s the meaning of the fiesta for them, where the huasteco music is associated.”

To really experience Son huasteco, you can’t beat seeing it in person. The music is unadorned, with only three instruments: a violin, a quinta huapanguera (a large guitar with 8 strings) and a jarana (a small guitar). Don’t mistake unadorned for simple, however. The rapid and often intricate sound of the violin soars while the two guitars hold their own complicated rhythm. When the music is played, people set up a platform of wooden boards so that their feet make noise as they dance to the music. This, Germano says, is why it’s best to see it live. “When you throw into the mix a live performance — where people are dancing on the tarima and creating their own rhythm — I think it’s just a magical sound.”

Getting to experience the music and the rhythm of Son huasteco firsthand is just one of the many reasons why teaching English abroad is a life-changing experience. If you’re interested in becoming a ESL teacher abroad in Mexico, you can visit our Mexico page or you can attend one of our free information sessions.

COVID and the Forecast for Teaching Abroad in 2022