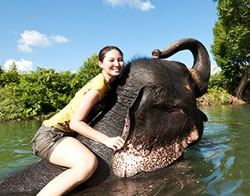 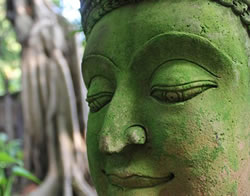 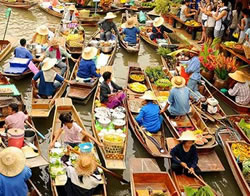 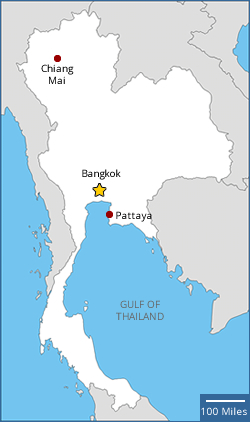 See other ESL teaching opportunities in
Asia
How Much Can I Earn?
Monthly Salary:
30,000 - 50,000 THB
902 - 1,504 USD
Private Tutoring per Hour:
450 - 700 THB
14 - 21 USD
Income Tax Rate:
10 - 15%
Ability to Save per Year:
1,700 - 9,800 USD
What Are My Benefits?
Accommodations:
Sometimes included or allowance may be given
Airfare:
Rarely included
Health Care:
Usually included
Holidays:
Paid
Free Info Sessions
What Will Teaching Be Like?
Teaching Hours:
18 - 25
Typical Contract Length:
One year preferred; short-term may be available
Typical Start Date:
May, November, or year round
Application Timeline:
1 - 4 months

Thailand, the “Land of Smiles,” is a great destination for ESL teachers who want to teach abroad and experience a country rich in history, famous for its culinary arts, and replete with vacation destinations.

What to Know About Living in Thailand

Housing in Thailand varies greatly between simplistic village dwellings and downtown luxury condominiums and houses. There are options for every income bracket and lifestyle choice. If living in a luxury Western complex, frequent dining at five star hotels, owning a vehicle and having household staff is important, then a teacher’s salary would likely not accommodate this lifestyle. However, most ESL teachers would be able to find suitable apartment accommodations and enjoy a moderate lifestyle at a very reasonable price.

Generally speaking, a bachelor apartment is a common choice for teachers. They are normally a single room with a bathroom, AC, and basic furniture such as a bed, wardrobe and chair. The AC and hot water heater (if included) are usually area units that can be turned on and off as needed. As electricity charges are generally above and beyond the rental price and can be quite expensive, being prudent to ensure all units are turned off when leaving the apartment is important to avoid a large bill at the end of the month.

Some landlords require three months' rent (or more) payment in advance and a better price can often be negotiated with a full year’s payment up front. As in America, landlords vary greatly, with some being very attentive to tenants and others responding slowly to requests. If possible, securing a reference from a previous tenant is ideal.

Schools sometimes provide accommodations or assist in securing them. Finding an apartment near the school would avert heavy traffic in large urban centers and simplify life in terms of after school activities and early school start times.

Airfare is typically not included in contracts for teaching in Thailand. On the rare occasion that it is included, it would normally take the form of a contract completion bonus. As such, factoring in the cost of a return flight along with all other expenses is important when negotiating a contract.

Most schools include medical coverage in their contracts following a three-month probationary period. During the first three months in-country, some schools may ask for an employee to obtain their own insurance or may assist in covering it through one of the various organizations such as BUPA or AIA.

Health care in Thailand is inexpensive and normally of high quality. ESL teachers can also choose to obtain insurance through a company in their home country before going abroad. This is normally a good idea no matter where you travel.

It would be prudent to bring a year’s supply of any medication for which you would not be comfortable using a substitute, as brands will often vary from North American pharmaceuticals.

As in many Asian countries, the established government retirement age is somewhat flexible in the private sector. Thailand’s retirement age of 60 is generally adhered to in government schools and most often followed by private schools. Some private schools will retain teachers over 60 if they have already established a relationship with them and feel that they will continue to be of benefit to the school.

As most health insurance companies will not grant policies for employees over age 60, finding employment in this age bracket can be a further challenge.

Thailand, as with most countries in South East Asia, is technologically advanced and ESL teachers will find communicating within the country and outside of Thailand relatively easy and inexpensive. If teachers do not have Internet access at their accommodations, there are options for accessing the internet and making phone calls elsewhere:

Many schools have high speed Internet, and as such, Skype or Zoom may be accessed while at school if permissible.

American Food continues to establish a presence in Thailand. In Bangkok and other large city centers, chain restaurants such as McDonald’s, KFC, Burger King and Hard Rock Café can be found easily.

While the three-wheeled "tuk tuk" is still a common way to get around Thai cities, they are slowly being replaced with fuel-efficient and air conditioned Toyota and Honda automobiles. Most taxis in Thailand are metered, and as such, fares do not need to be negotiated. It is best to choose a metered taxi unless traveling a long distance.

Fares are very inexpensive compared to American taxi services and a great option for ESL teachers to get around at a very reasonable price.

Tips When Traveling by Taxi:

Thailand has over 2,700 miles of railway tracks, not including the mass transit lines within Bangkok, reaching the farthest corners of the Kingdom and its borders. Four main lines can transport you comfortably from Bangkok to destinations throughout Thailand, and international travelers can take connecting train lines all the way to neighboring Malaysia, Laos, and Cambodia.

The Metropolitan Rapid Transit in Bangkok (MRT), also referred to as Bangkok Metro, has an approximate daily ridership of 470,000 and costs between 16-42 Baht. The trains run from 6am through to midnight and trains arrive every 5-7 minutes, making this an effective way to travel.

The Skytrain has reduced commute time in Bangkok significantly for many. It reaches most places in Bangkok and, while more expensive than a taxi, is a welcome alternative to sitting in heavy traffic. There are two lines: Silom runs West to South and Sukhumvit runs North to East, converging at Siam station. Fares range from 16-59 Baht.

The bus system in Thailand has a wide range of options. Long distance buses can be classified as follows:

Buses are among the most affordable modes of transportation and as such can become quite crammed during rush hour; it is important to guard any valuables on your person as crowded buses provide an opportunity for pick-pocketers to go undetected.

Other modes of transportation that are available for ESL teachers include:

Taxis are easily identified as the drivers are clad in orange or red vests. The motorcycle taxi is a great option for beating the traffic on short trips, although it does carry risks. Beyond being directly exposed to the air pollution, some motorcycle taxis can be aggressive drivers and exacerbate the normal risks associated with this type of transportation. Should this be the transportation mode of choice, one should be careful to keep knees in tight and wear a helmet. Helmets are required by law and you will be the one fined if pulled over, so be sure to hail a motorcycle taxi with an extra helmet.

Cycling is a common mode of transportation in Thailand. The following should be considered for this option:

The first license is issued for one year and is often referred to as a temporary or provisional license.

In case of a motor vehicle accident, determining the party at fault is generally based upon who has the more expensive vehicle, and should a foreigner be among those involved, they may bear the responsibility. Fines associated with accidents are sometimes proportionate to the amount of money in one’s wallet or bank account.

One should not call traffic police at an accident, as they would generally factor in a fine (or bribe) that they would keep for themselves. Call the tourist police if you are in Bangkok or a major tourist area and they will send someone to assist you. Take a photo of the accident at every possible angle and provide these to your insurance company. Also try to gather as much information about the other driver as possible, but stay calm and let a cool head prevail.

Thailand’s culture, as in most Asian countries, is based on respect and honor. Keeping this in mind when considering various customs and points of etiquette will give a greater understanding of the culture while in-country.

Some examples of commonly practiced customs and etiquette ESL teachers should know include:

Traditional dining in Thai restaurants is somewhat communal in nature. Generally, a group will order their selections as shared dishes. While the younger generation is adopting many western practices, it is helpful to keep the backdrop of traditional culture in mind.

A few things to consider:

With 44 consonants, 32 vowels, and five pronunciation tones, Thai (Siamese), a tonal language with many similarities to Lao, is the official language in Thailand. Tonal languages tend to have more complexities; however, being open to learning common phrases (and beyond, for those ready for a challenge) is a compliment to the Thai people. It would make life in Thailand a richer experience, and add convenience to daily living.

Authentic Thai cuisine generally includes a balance of spicy, sour, sweet, salty and bitter (optional) within each dish or meal. Similar to the French, Thais place a strong emphasis on noticing quality and detail, taking small portions and making a meal linger through the enjoyment of conversation and community.

Rice is a staple in Thailand, as in most Asian countries, and is served at virtually every meal; jasmine and sticky varieties are among the most common. Noodles are also widely used in Thai cuisine, often made from rice. Pad Thai is one of the most common noodle dishes, having become very popular in the West.

Purchasing a meal from a street vendor is extremely inexpensive and usually delicious. However, eExercising caution when doing so is prudent; avoid meat dishes in extremely hot weather and choose vendors using a cooling device of some sort. Selecting a dish that is well cooked is important.

Tap water is not potable and should not be consumed. Purchasing bottled water is very inexpensive and accessible. As Thailand is a tropical country, keeping hydrated is a priority.

Some of the most popular Thai dishes foreigners choose include:

Three seasons dictate the weather of Thailand: hot, wet, and cool. ESL teachers going to Thailand should consider taking attire to match each of these seasons; however, as clothing is inexpensive, it can be purchased (mostly smaller sizes) or made by a tailor once there. There is some variety in temperature, depending upon the location, with temperatures in the hills being wetter and cooler than in other parts of the country.

Hot Season – The hot season is generally short, typically lasting from mid-March through late May, with daytime temperatures reaching up to 104° Fahrenheit with high humidity.

Wet Season – Monsoon rains kick off the rainy season in late May or early June. The season generally lasts until October. Rarely are there full days of rain: sunny mornings are followed by one to two hours of rain and followed again by sun. On rare occasions in August or September, a typhoon may occur. Temperatures average around 89° Fahrenheit during mid-afternoon and drop to approximately 73° at night.

Cool Season – Beginning in early November and lasting through February or March, the cool season brings with it temperatures averaging around 82° Fahrenheit and dropping as low as 50° at night. During the cool season, there may be as little as one occasion of rainfall per month.

There is no shortage of holidays in Thailand. Many are based on the lunar calendar, and as such are on different dates from year to year. Although businesses and government offices are closed on public holidays, tourist attractions and shops remain open.

Below is a list of some of the most common holidays:

Visakha Bucha - May
Celebrates the birth, enlightenment and entry into Nirvana of Buddha – National holiday