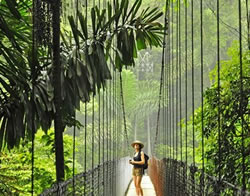 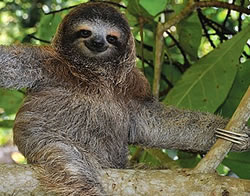 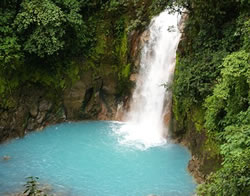 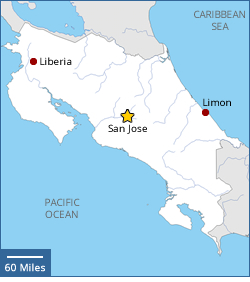 See other ESL teaching opportunities in
Latin America
How Much Can I Earn?
Monthly Salary:
370,000 - 710,000 CRC
582 - 1,117 USD
Private Tutoring per Hour:
6,000 - 18,000 CRC
9 - 28 USD
Income Tax Rate:
0%
Ability to Save per Year:
500 - 5,100 USD
What Are My Benefits?
Accommodations:
Sometimes included or allowance may be given
Airfare:
Rarely included
Health Care:
Supplementary healthcare recommended
Holidays:
Usually paid
Free Info Sessions
What Will Teaching Be Like?
Teaching Hours:
18 - 30
Typical Contract Length:
One year or less
Typical Start Date:
Year round
Application Timeline:
1 - 3 months


What Do I Need?
Work Visa:
Employer sometimes sponsors
Education Requirements:
Bachelor's Degree,
Oxford Seminars TESOL/TESL/TEFL Certificate
Additional Notes:
Candidates are encouraged to apply in person; minimum requirements are generally higher for those applying from out-of-country
Courses in My Area

Adventurous ESL teachers in Costa Rica can spend their free time hiking volcanoes, zipping through the misty canopy of the Monteverde Cloud Forest, and soaking up the sun on one of the many beaches. All this, combined with the many ESL teaching opportunities available, make Costa Rica an excellent destination of choice.

Why Teach in Costa Rica

ESL Teachers in Costa Rica can enjoy the Monteverde Cloud Forest, the quiet black sand beaches of Puerto Viejo, and the exotic wildlife of the Corcovado National Park. They can enjoy the colorful markets, warm climate, and exotic food, all while teaching ESL.

The country of Costa Rica is partially made up of tropical islands and is one of the world's largest tourist destinations, including many visitors from Canada and the United States. Costa Rica may be a small country, but it is known for its biodiversity and its large portion of protected wilderness. There are many ESL teaching opportunities available which adds to making Costa Rica an excellent destination of choice.

What to Know About Living in Costa Rica

Foreigners to Costa Rica have many housing options including: condos, apartments, houses on the beach in gated communities, or homestays with local Ticos (Costa Ricans) in their communities. While there are ultra luxury homes available with higher price tags, most teachers will probably prefer to rent an apartment or small house, and save more of their earnings for fun weekend and holiday excursions. One bedroom apartments in city centres have rents starting at approximately 300,000 CRC per month, while the same apartment outside the city centre might start at around 200,000 CRC rent per month. Modest small houses can also be found in the range of 250,000 - 400,000 CRC rent per month, though much depends on proximity to large city centres. Accommodations in the heart of large city centres are higher than those 80 kilometers beyond city limits. The same can be said for accomodations in larger, urban centres versus renting in smaller towns and rural areas.

Basic utilities such as electricity and water are less expensive than they are in North America, running at approximately 40,000 - 45,000 CRC per month. Air conditioning is rarely required as most regions are temperate. Those living in beach areas, however, typically have the added moderate expense of air conditioning. Monthly internet prices are estimated to be in the range of 30,000 - 35,000 CRC for unlimited data use connections.

As is the case for most countries in Latin America, airfare is not usually included in contracts for teaching ESL in Costa Rica. Due to the high number of expatriates that travel to Costa Rica to find work in person, and due to its less than thriving economy, most schools decline including this benefit in remuneration packages.

The official retirement age in Costa Rica, the age at which citizens with at least 300 months of contributions are eligible for state pensions, is 65. While the average age of teachers in Costa Rica ranges from the mid 20s to early 40s, older teachers do find opportunities - especially those with previous teaching experience.

Costa Rica has a relatively modern telecommunications system; however, a number of factors prevent it from keeping up with the speed of changing technology, most notably the state-owned monopoly of the industry. That said, internet and mobile phone connectivity is widespread in urban areas, though connectivity may be less consistently available in rural and remote regions.

Internet service is available throughout Costa Rica at relatively economical prices. However, by North American standards, it may be slower and less reliable, especially in rural and remote regions. These factors are due in part to the state-owned monopoly of Internet and other related services.

For a taste of home, American restaurants/cafés have become a common part of the urban landscape in Costa Rica, including:

Among others, various national grocery chain stores - such as Auto Mercado and Hipermas - carry many North American brands and items. While prices are higher than they are at local markets, these are still affordable stores at which to shop. Walmart also has stores in Costa Rica.

Taxi service in Costa Rica is widely available and reasonably priced. Though taxi colours may vary from city to city, many taxis are red and have the company’s insignia on top or on the door of the car.

Fares generally start around 640 CRC with an additional 640 CRC/km. ESL teachers should ensure that the taxi’s meter is in working condition. Should a driver try to negotiate a flat rate, a different taxi should be chosen, as the law requires taxis to be metered.

Tips When Travelling By Taxi:

Travel by train in Costa Rica is not a common form of transportation. There is not an intra-city train system; however, there are some inter-city commuter lines that run, primarily to and from San José. Trains are generally fast and inexpensive. The train costs roughly between 200 - 500 CRC, depending on the length of your trip.

Some claim that bus service in Costa Rica is the best in all of Latin America. Buses are inexpensive, comfortable, reliable, and accessible. City bus fares typically run between 150 - 400 CRC, depending on distance travelled. Cash is usually required for payment of fares.

While there are designated bus stops throughout cities in Costa Rica, buses will often stop if hailed by someone, providing there is a safe place to pull over and stop.

Bus service between cities is available and very inexpensive. Most fares between cities run under 5000 CRC, though first-class services and express services cost more than slower, local services. Express buses are generally air-conditioned.

Other modes of transportation that are available for ESL teachers include:

Airline service between cities in Costa Rica is well established. There are two main domestic airline companies with competitive pricing.

Costa Rica is in compliance with International Civil Aviation Organization (ICAO) aviation safety standards. Sansa and NatureAir are the most popular airlines of choice.

Travel by boat or ferry is a great way to see the spectacular sights of Costa Rica. As most boats are open to the elements, following weather patterns would be helpful.

Cycling in Costa Rica should be done with a great deal of caution. Vehicular accidents are higher than in most industrialized countries due to road conditions, reckless driving, ignoring of traffic laws, and intoxication. Cyclists must ride defensively.

Tips When Riding a Bicycle:

Driving in Costa Rica can be a challenge. Roadways are crowded and often shared with pedestrians, cyclists, and farm animals. Potholes are an ongoing problem on roadways and traffic laws are often ignored. Visibility is impaired at times due to extreme weather systems and heavy rain. The shoulders on roads are often narrow and don’t leave much room to negotiate other traffic or road users.

Drivers from the US or Canada can use their own country’s driver’s license or an international driver’s license for up to three months after arriving in Costa Rica, provided that one’s visa is still valid.

Foreigners seeking to obtain a Costa Rican driver’s license must provide a current passport, valid visa, medical certificate, and current driver’s license from one’s home country. As the driver’s blood type is recorded on the license, knowing this information is vital. Obtaining a driver’s license is one of the easier governmental documents to obtain. It would be prudent to verify required documents as rules and regulations change from time to time.

Some tips to keep in mind:

Costa Ricans, commonly known as Ticos, are warm, gracious, and polite. They are somewhat less demonstrative and more reserved than many of their Latin American neighbors; nevertheless, are quick to engage in dialog with foreigners. They enjoy hearing about other cultures and are eager to share their own. Costa Ricans hold a deep sense of honor and as such avoid situations and conversations which could be interpreted as disrespectful to themselves or others.

The following are some helpful guidelines for etiquette.

Following are some helpful dining hints:

Spanish is the national language spoken in Costa Rica. Students in school are required to learn it along with a second language, either English or French, with English being the predominant choice because of its international influence.

Learning conversational Spanish can be a fun process when using interesting approaches such as: watching English movies with Spanish sub-titles, using mobile phone apps to study Spanish and look up words and phrases, studying a pocket phrase-book, or striking up conversations in the marketplace. Learning to speak Spanish in order to get around and to purchase goods is extremely helpful.

Learning to speak the language, even at a very basic level, makes one’s experience in another culture much richer and is a compliment to the national people. Following is a list of common Spanish phrases:

How are you?
¿Cómo está?

What is your name?
¿Cómo te llamas?

My name is
Me llamo

How much does this cost?
¿Cuánto cuesta?

Investing in a pocket phrasebook would be an invaluable purchase. Even if pronouncing a particular word is difficult, pointing to the word in a phrasebook could prove helpful. Be sure to download translation and dictionary apps to your mobile phone as well, as these are also essential tools for those living and travelling overseas.

Costa Rica’s staples are rice with black beans, virtually served at every meal. Of course, these two food items are used in a myriad of ways to create a delicious array of meals.

A good practice is to keep a notebook or keep notes on your phone for food preferences, to help remember which foods you preferred after sampling various dishes at functions, or recall good choices ordered at restaurants.

Costa Rica enjoys a diverse, yet moderate climate, with average annual temperatures between 70° - 81°F.  It has two seasons: “winter” (rainy season), and “summer” (dry season).  Its diverse geography and elevations create mini weather systems. The beaches are tropical and reach very hot temperatures, averaging between 80 – mid 90°sF. The mountains are cooler and usually don’t exceed 65°F during the day. The rainforests are hot and humid, while cloud forests are cool and moist.

Summer – Costa Rica’s dry summer season generally lasts from December through late May; rarely does it rain during this time.

Winter – Costa Rica’s rainy winter season generally lasts between late May or early June and November. While it typically rains one or more hours during the early afternoon, there are still many hours of sunshine to be enjoyed. This season is also called Green, as the landscape is lush due to the combination of rain and sunshine. September and October tend to be the months with the heaviest rainfall.

Earthquakes, hurricanes, and floods are the most common natural disasters in Costa Rica.

Due to the fact that it is geologically positioned in an active land area in which tetonic plates are constantly shifting, Costa Rica experiences its share of earthquakes. The shifting of these plates also has an impact on the active volcanoes in the region.

Hurricanes and flooding combined have accounted for the greatest impact on Costa Rica in terms of natural disasters.

Costa Rica is predominately a Catholic country, and as such, most of its holidays are religious in nature. Below is a list of the primary holidays celebrated in Costa Rica: